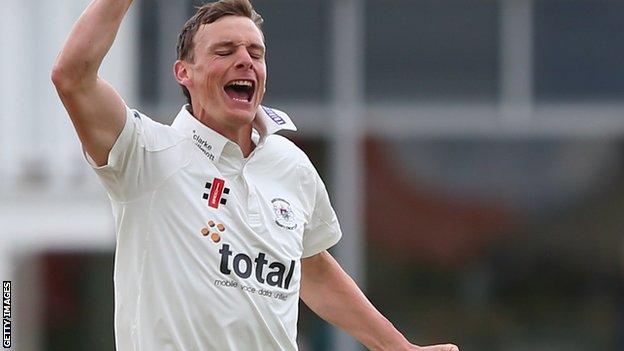 Gloucestershire sealed victory over Hampshire after both sides forfeited an innings on day three at Southampton.

Resuming on 349-7, Gareth Roderick (45 not out) helped the visitors towards a first-innings total of 410-9 declared.

Having suffered a complete wash-out on the opening day, the two skippers reached an agreement to force a result, leaving Hampshire needing 411 to win.

It was an impressive performance by Gidman, who also scored a useful 42 with the bat on his return to the side following injury.

Hampshire captain Jimmy Adams may well regret agreeing to the manufactured target as he was dismissed for a duck in the second over.

However, it was the loss of five wickets for 25 runs, which saw them slump to 88-5, effectively ending their hopes of getting close to the target.

"Hampshire were out-bowled and and out-batted.

"Certainly, credit must be given to both sides for setting up a game, with Hampshire forfeiting their first innings and Gloucestershire their second. But, really, 411 to win was always going to be a hard task.

"To put it in perspective, if Hampshire had been successful then it would have been the second-highest successful run chase in their history. Ironically their highest (446) came against Gloucestershire back in 1990."

"I would hope that Michael Klinger is by my side when I negotiate a pay rise. Credit to Hampshire for accepting the offer of both sides forfeiting an innings but it was always going to favour Gloucestershire.

"The visitors bowled superbly though, with wickets spread amongst the attack and having Will Gidman back made a real difference. He batted well and his four wickets helped his side unbelievably win inside two days."