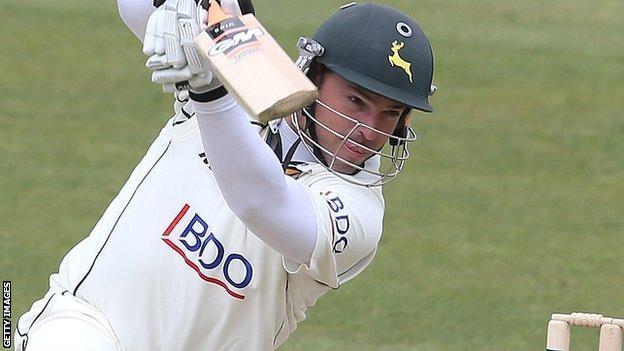 Michael Lumb maintained his excellent form with a third century of the summer for Notts after they denied Derbyshire maximum batting points on day three.

The visitors were all out for 391, despite a last-wicket stand of 54 between Mark Footitt and Mark Turner.

Lumb came in when Riki Wessels retired hurt after being hit on the right hand with a rising ball from Footitt.

Lumb in the runs again

Once again, the day was disrupted by showers, but the close-of-play situation means that, if Notts do not opt to pursue maximum batting points on the final day, two carefully calculated declarations could set up the chance of a positive result.

Derbyshire managed to add 85 for their final four wickets after resuming on 306-6, despite the excellence of Andre Adams, who added the wicket of Richard Johnson (22) for figures of 4-69.

When Notts began their reply, seam bowler Groenewald needed two wickets to reach his personal milestone, picking up the first when Ed Cowan edged to Chesney Hughes in the slips.

However, he had to wait 30 overs for his next success, bowling James Taylor for 40 after a stand of 121 with Lumb, who reached three figures with two boundaries in the same over.

Samit Patel fell cheaply to Footitt shortly before the close, prompting Notts to send out Luke Fletcher as nightwatchman, but Lumb saw it through to the close, having hit 17 fours in all during his 133-ball innings.