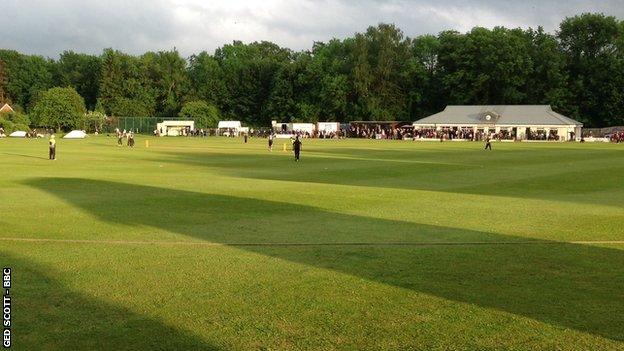 Shropshire put in a very encouraging show as they took Worcestershire almost all the way on Wednesday evening at Shifnal in the now annual Twenty20 game between the two neighbouring counties.

Shropshire lost by four wickets with eight balls to spare in a game they for a long time looked like winning.

The home side posted a daunting target of 182-7 from their 20 overs.

"It was exactly what we've been looking for from both of them,"stand-in Worcestershire skipper Moeen Ali told BBC Sport. "They had a point to prove and needed a decent knock and it should do them both a lot of good."

After a delayed start because of afternoon rain, Bilal Shafayat led the way with 62, sharing a stand of 58 for the second wicket with skipper Richard Oliver, who made 20, while former captain Ed Foster weighed in with 28.

Where next for Worcestershire?

In reply, the early loss of Sri Lankan Test batsman Thilan Samaraweera and skipper for the night Moeen Ali looked to have plunged Worcestershire intro trouble.

But a stand of 51 for the fourth wicket involving Dutchman Alexei Kervezee, who made 26, and young debutant Tom Kohler-Cadmore (20) helped turn things round for the visitors.

And, after managing to stay on the field during a heavy 10-minute rain shower, Worcestershire had one more crucial partnership,

Cox made 31, while Pinner was still there at the end on 77 when the winning run was struck in the penultimate over.

Joe Leach starred for Shropshire with the ball, taking 2-14 in his three overs, but the luckless Jack Shantry, guesting for his old county for the evening, went for 46 off 3.4 overs.

Shropshire in the end went down to a brave defeat, just as they did at Shrewsbury last year. But, although disappointed at his team not having won, confidence in the camp is still soaring ahead of Sunday's MCCA Trophy quarter-final against Wales, also at Shifnal.

Having won the trophy for the first time in 2010, Shropshire take on Wales, looking to book a semi-final away to either Cambridgeshire or Hertfordshire.