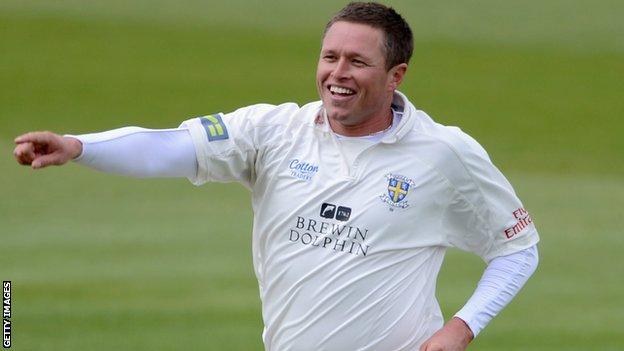 After agreeing an initial one-month loan from Durham on Tuesday, he was included in the County Championship team to face Glamorgan the next day.

"Things weren't working out at Durham and [Kent coach] Jimmy Adams phoned me on Monday and I headed straight down," he told BBC Radio Kent.

"If I bowl terribly, Kent won't want to keep me but I'd like to stay on as it's a club I always earmarked playing for."

The Australian-born paceman joins up at the St Lawrence Ground with former Durham players Mark Davies and Ben Harmison, both of whom left the Riverside for Kent ahead of the 2012 season.

Since joining in 2006, Claydon has taken almost 200 wickets in 48 first-class and 61 one-day matches for Durham, but this season he has not appeared for the first XI.

"I had a bit of interest from a few clubs but Jimmy was really keen to get me in," Claydon added.

"Ben Harmison was one of my best mates at Durham and lived with me for two years in Australia so I already knew from him that this was a good place to come.

"Durham told me I wouldn't be getting in the team and I just want to play as much cricket as possible."