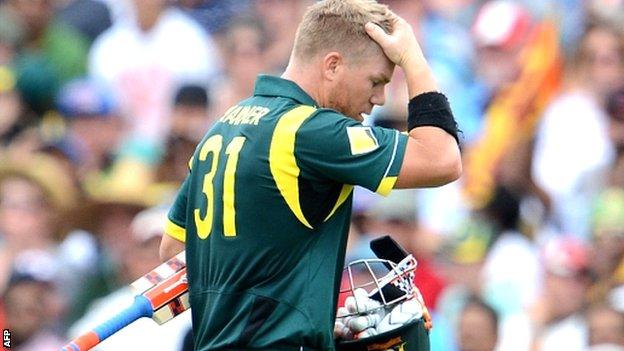 The fact that Australian batsman David Warner will have absolutely no preparation for the Ashes, having been banned up until the first Test on 10 July, is what makes it a good punishment.

Warner was suspended on Thursday for an alleged attack on England batsman Joe Root in a bar.

He had been mentioned as a future Australia captain by Michael Clarke at the start of this tour, but the remotest possibility of that happening disappeared in the VIP section of the Walkabout bar in Birmingham on Sunday morning.

Cricketers are very wealthy these days and a fine makes much less of an impact than interrupting their career.

Warner gets $750,000 for his Indian Premier League contract, so a £7,000 fine isn't going to hurt him very much, but he's going to have to have his fingers crossed that he can somehow get into the first Test.

"A kid from the back blocks with a strong personality, Warner is outgoing, likes talking to people and always has an opinion.

He is popular with his team-mates and respected in the dressing room.

He has that lively and nocturnal side to his personality. But he is 26 now and, off the field, he needs to change."

You raise your eyebrows more that he's been suspended for the preparation games than you do for the fine, because he has hardly scored a run - two ducks in the Champions Trophy warm-up game and nine in Australia's first match against England, a defeat by 48 runs.

I suspect they're going to make him sweat, work hard, knuckle down and show the team that he's committed and is not going to step out of line again.

He'll have come here to play in the Ashes and this will focus his mind a bit.

There's not a huge amount of point in sending him home, a £7,000 fine is OK and double what he got for his Twitter rant, but it's the career, the playing, the Ashes - that's what will matter to every Australian here.

To try to prove he's fit and ready and in any sort of condition to play in the Ashes, he's going to have to work his backside off in the nets, in training and in his commitment with the team.

He is going to have to up his game and if he doesn't do that he's not going to play in the first Test, which means he probably won't play in the second.

Over to you, David, is the message I think.

Australia coach Mickey Arthur is a cunning so-and-so and I'm sure he'll use this as a means of trying to get people together, to say 'we are here to do a job, if we win we'll go back as heroes and if we carry on like this we'll be a laughing stock'.

In a bit of a crisis it can work that way; it's easy to say they're a bit of a shambles but actually it's only one bloke and he's done it before, so others are probably thinking what a fool he has been anyway.

They will not want their Ashes prospects to be damaged by Warner and I'm sure they will knuckle down and work all the harder to overcome it.

It leaves them short of batsmen, however. Whether they have to call someone up or whether George Bailey (stand-in one-day skipper) stays for a while, all that has to be decided.

A few things have happened since South African Arthur became the first non-Australian to take charge of the national team in 2011.

There was the "homework-gate" on the tour of India - when four members of the squad were dropped for a breach of discipline - but he is a respected individual and I don't think you can describe the whole team as being ill-disciplined just because of Warner.

I know for a fact England players will have been spoken to about being in a bar themselves; it's not the image of the England players that you want to portray and trouble happens at two o'clock in bars.

To go to an Australian bar the night they have just beaten Australia is clearly not a very sensible choice.

If you're given a night off, that's fine, but think about it... there are pros and cons of being an international sportsman, a huge amount of pros as we know, but there are also things like keeping yourself out of harm's way, removing yourself from situations which you cannot control.

None of that is to say Root deserved to be smacked in the face by an Australian opening batsman, but you do all you can to remove yourself from awkward situations and being in a bar at two o'clock in the morning is not a good place for an England cricketer to be.