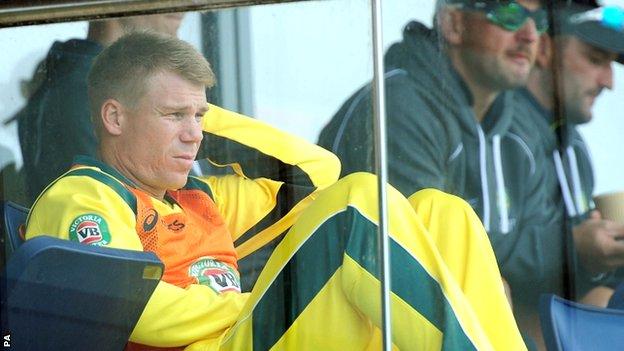 Australia batsman David Warner has been suspended until the first Ashes Test match for an alleged attack on England batsman Joe Root in a bar.

"A kid from the back blocks with a strong personality, Warner is outgoing, likes talking to people and always has an opinion. He is popular with his team-mates and respected in the dressing room. He has that lively and nocturnal side to his personality. But he is 26 now, and off the field he needs to change."

He will now miss the remainder of his country's Champions Trophy campaign.

Warner will also be absent for tour matches against Somerset and Worcestershire, but can play in the first Ashes Test on 10 July.

England and Australia players were in the Walkabout pub in the early hours of Sunday when opening batsman Warner is alleged to have struck England batsman Root.

BBC Radio 5 live's Pat Murphy said: "I believe it happened around 02:00 (BST) at the bar in the centre of Birmingham.

"There was a private VIP area and some of the Australia players were in there. The three England players, Joe Root, Stuart Broad and Chris Woakes, were some way away and were larking around - wearing silly wigs and that.

"I understand Warner took umbrage and went over to Root and glanced him on the chin.

"Broad put his arm around Root as soon as it happened and said 'time to go back to the hotel' and I am also told that they were not worse for wear."

Warner, who has played in 19 Test matches for his country, was dropped for Australia's Champions Trophy game against New Zealand on Wednesday as a punishment.

He could have been sent home from the tour after pleading guilty to a charge of "unbecoming behaviour".

His suspension means he will not be allowed to play until the five-Test Ashes series begins at Trent Bridge.

But Warner is in a poor run of form, with seven single-figure scores in his last nine innings while playing for Delhi Daredevils in the Indian Premier League and one-day internationals for Australia.

In a statement, the England and Wales Cricket Board cleared their players of any blame.

"Following a full investigation, the England team management has concluded that the England player was in no way responsible for, nor retaliated to, the attack," said the ECB statement.

England bowler Broad told Sky Sports: "We were within our rights to be out, and we did nothing wrong. We are obviously on show as England cricketers and we need to be aware of that."

This incident is not the first time Warner has been in trouble with Cricket Australia and last month he was fined £3,700 for a foul-mouthed Twitter exchange with two Australian journalists.