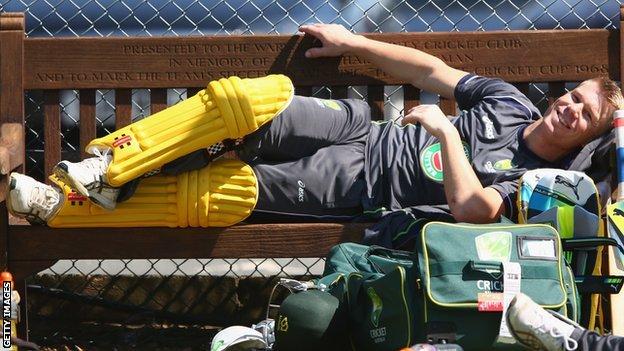 David Warner is a loose cannon for Australia, but he is still a potential match-winner.

Nevertheless, this latest incident, which saw him dropped for the Champions Trophy match against New Zealand after allegedly attacking England batsman Joe Root in a bar, shows he needs to change his ways.

Anyone who has followed Warner's career will see a story of a gifted batsman - an explosive player like England's Kevin Pietersen or fellow Aussie Adam Gilchrist, someone who can destroy a bowler's confidence and turn a game in an hour - but one who is frequently controversial.

Only last month he was fined £3,700 by Cricket Australia for directing some colourful language towards journalists on Twitter after his picture had appeared, unfairly, in a story connected with corruption in the Indian Premier League.

A kid from the back blocks with a strong personality, he is outgoing, likes talking to people and always has an opinion. He is popular with his team-mates and respected in the dressing room. He has that lively and nocturnal side to his personality.

But he is 26 now, and off the field he needs to change. He can be belligerent and has not handled the pressure of international cricket as well as he might have done. This is his last chance. He needs to be more in control of himself and grow up or lose his place in the team.

Warner has had a tough upbringing, raised in housing commission accommodation at Matraville in Sydney, and has played grade cricket for Eastern Suburbs Cricket Club for 10 years.

His family have supported him throughout his career, and his parents, Howard and Lorraine Warner, run the canteen at the club, while older brother Steve is also a hard-hitting batsman there.

His talent is not in question, but his reputation for explosive hitting has rather worked against him at times.

I am on Eastern Suburbs' committee and saw him destroy bowlers during his teenage years. At under-16 level he made phenomenal scores and he kept doing that into his 20s.

He got a chance in a Twenty20 game and smashed a South African attack including Dale Steyn at the MCG, scoring 89. From that moment he had arrived and was a white-ball demolition expert. Unfortunately for Warner, it is a reputation he cannot get rid of.

He has now played 19 Test matches but I didn't expect him to make it to that level. No-one was certain if his game was good enough in the longer form, but we were all stupid to think he would not be successful.

Nevertheless, our opinions were shared elsewhere and it has taken him a long time to prove he is more than just a tonker, someone who can clear the boundary at will.

And unfortunately his attempt to change his style is exactly where he is going wrong, with seven single-figure scores in his last nine innings while playing in the IPL for the Delhi Daredevils or one-day internationals for Australia.

He is no longer playing like David Warner: he is thinking about the game too much and his confidence has been shaken.

Warner's pride will also be hurting after this latest off-field incident too - and so it should be. I hope he thinks he let his team-mates down.

I want to hear the full facts, but he should certainly get a rap on the knuckles and be told to modify his behaviour.

Four players were dropped from the Indian tour for not doing their homework and giving a presentation to the rest of the squad and this would seem to be a much more serious offence.

What it again highlights is the lack of discipline in the Australia squad, something we have seen since the retirements of Ricky Ponting and Michael Hussey.

"I don't think David Warner is as good as he was 12 months ago and we are not seeing the game we are used to.

"He has a different mentality to his batting game, he used to be see-ball, hit-ball but there's more technique involved now and a bit more thought.

"He is one of those people that can destroy you but at the moment you do not feel that, you feel you will get a dot ball or even his wicket.

"I don't think it's a fear of failing, he is stronger than that, he is just trying to adapt his game and trying to be an all-round cricketer."

The incident in India was managed very clumsily. It was a huge embarrassment, made Cricket Australia look a laughing stock and suggested the management had lost the trust of the players.

Head coach Mickey Arthur and captain Michael Clarke need to pull this together, get the respect of everyone and make sure everyone is playing as a team. They all have a responsibility to be at their best and to contribute, but some of the guys have lost the plot as far as that goes.

But on that score, Clarke's back injury is a bigger concern than Warner's behaviour.

I wouldn't expect people that follow the game closely in Australia to think we will win the Ashes - a lot of people have resigned themselves to the fact we can't - but there will be a view we might sneak a Test or two.

I wouldn't say we won't win, but there's not a lot of belief in this Australian team. This line-up cannot score runs consistently.

A focused and on-form Warner would certainly boost their chances.