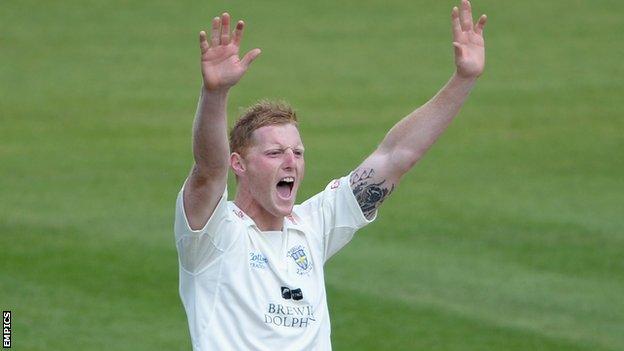 Durham seamer Ben Stokes took four wickets at Chester-le-Street to help earn his side a first-innings lead as Warwickshire were bowled out for 209.

But the visiting bowlers hit back late on, on a day when 17 wickets fell, to reduce the home side to 152-8.

After the Bears resumed on 31-1, Stokes took 4-49 as Warwickshire lost their last five wickets after lunch for 93.

Mark Stoneman was Durham's second innings anchor, reaching his half-century for the seventh time in his last 10 County Championship innings.

After his first innings second ball duck, he hit 83, comfortably more than half his side's total, before being bowled by Rankin.

Play began half an hour late following rain and there was some uneven bounce, but there were not enough gremlins in the pitch to explain the day's two collapses.

Then Durham, having reached 49 without loss, slid to 57-3, undone by two quick wickets from Patel either side of the first of the three victims for Rankin (3-49).

And the slide went on, Clarke also claiming two victims, while Stokes was run out after being sent back by Stoneman, only to slip in mid-pitch.

"Play eventually finished here at 7.14pm, with Durham making a real meal of their second innings. It's a good job they held a 58-run first innings lead.

"At the close the had a lead of 210, but Scott Borthwick, Will Smith, Paul Collingwood and Ben Stokes all failed to reach double figures, while Phil Mustard picked up a pair.

"If it had not been for a gutsy 83 from Mark Stoneman, while chaos reigned around him, things could have been a lot worse.

"Warwickshire will feel they have a real foothold in this game now. And it should be over in three days as well."