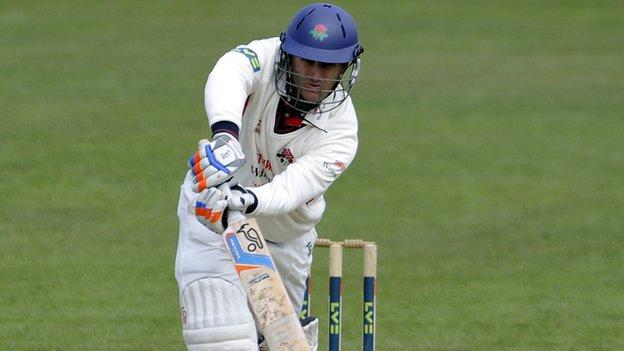 Simon Katich's chanceless first century for Lancashire helped them fight back well against Essex at Chelmsford.

Essex added just five runs to their overnight score to be bowled out for 273, with visiting skipper Glen Chapple (3-47) taking both wickets to fall.

Katich then hit an unbeaten 120, sharing a stand of 110 for the third wicket with Ashwell Prince (56).

Lancashire closed on 266-7, just seven behind, when the umpires ended play six overs early - with the new ball due.

The Lancashire innings looked like crumbling either side of tea as they lost five wickets for 57 runs inside 20 overs against the pace of Graham Napier and left-armer Reece Topley.

But Katich found useful late support from Kyle Hogg, adding 58 runs before bad light brought an end to proceedings for the day.

Earlier, Championship debutant Luis Reece made a pleasing start, reaching the boundary on the second ball faced. And, by the time the Chorley-educated 22 year-old was caught at second slip off Napier for 24, he had reached the ropes on a further four occasions.