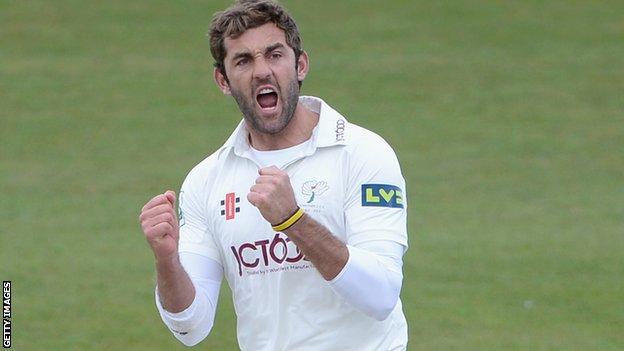 Middlesex face a final-day battle to avoid defeat at Lord's as Yorkshire's bowlers put themselves in prime place to go top of the County Championship.

Liam Plunkett and Steven Patterson both took four wickets as the hosts limped to a first-innings total of 175, with Gareth Berg's 54 the top score.

Having followed on 215 in arrears, Middlesex lost Chris Rogers to the fifth ball of their second innings.

Resuming on 16-1, Middlesex's day got off to the worst possible start when Joe Denly was caught by Joe Sayers off the bowling of Ryan Sidebottom (2-48) in the fourth over.

Their second effort started in similar fashion with Sidebottom having Rogers caught behind for nought in the first over.

Sam Robson (46) then shared 68 for the second wicket with Denly (31), but the pair fell within six overs of each other and, after Adam London was trapped in front by Rashid, it was left to Neil Dexter and John Simpson to see out the final 17 overs.

The hosts ended the day still requiring another 78 runs just to make Yorkshire bat again, with only six wickets remaining.

"Middlesex must try to do to Yorkshire on the final day at Lord's what Sussex did to them on the same ground last week.

"It is a virtually identical situation for the hosts but in reverse, as they were denied victory by Sussex despite the batting side still trailing at stumps on day three as they followed on with only six wickets standing.

"The pitches have generally flattened out as the matches have gone on at the home of cricket this summer and Middlesex have already saved one game when forced to follow on against Surrey. In fact, this is the third consecutive match at Lord's where the follow-on has been enforced, but each time the game has been drawn.

"However, the pitch on this occasion has offered more assistance to the bowlers, in no small part due to the rain that has interrupted the game and the overcast conditions that have been ever present."

"It is the 150th anniversary of Yorkshire County Cricket Club - could it be a championship title for them to add to the celebrations?

"It is too soon to make such a rash prediction, but the Tykes look good and should polish off Middlesex tomorrow.

"The home side are still 78 runs adrift after following on and only have six wickets left. Yorkshire took 13 wickets in the day and are in total control.

"Middlesex will need fighting qualities of a unique nature to get out of this mess. The fat lady is not singing but she is warming up."