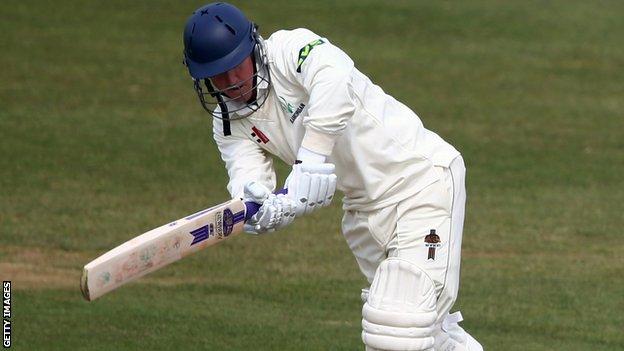 Murray Goodwin scored 136 as Glamorgan reached 378 all out before reducing Kent to 73-4 at stumps on day two.

The Zimbabwean began the day on 35, with his side 155-4, sharing a century stand with Mark Wallace before wickets fell regularly.

Goodwin hit 19 fours before departing as the tail nudged Glamorgan past 350.

In reply, Kent's top order failed to forge a meaningful partnership, Michael Hogan grabbing two wickets to put the visitors in control at the close.

"Murray Goodwin may be one of the oldest players on the county circuit but he has not lost any of the expertise that plundered 67 centuries before he joined Glamorgan.

"After scoring his first hundred for the Welsh county against Gloucestershire last week he followed up with another on a seaming Canterbury pitch.

"Ten overs were lost at the end of the day but, at 73-4, Kent will require far more application from their remaining batsmen if they are to reach the follow-on target of 229."