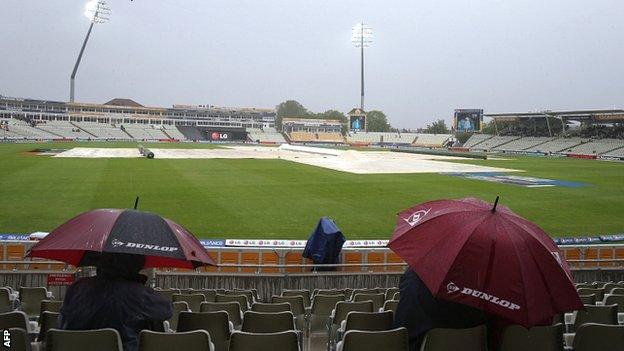 New Zealand and Australia took a point apiece as their Champions Trophy Group A match was abandoned because of rain.

Having left out David Warner because of an incident in the early hours of Sunday, Australia made 243-8 as Adam Voges struck 71 and George Bailey 55.

New Zealand were 51-2 when rain arrived after 15 overs, five overs short of the number needed for a result.

As a consequence, England will qualify for the semi-finals if they beat Sri Lanka at The Oval on Thursday.

The abandonment favours New Zealand, who beat Sri Lanka on Sunday, rather more than Australia, who were well placed in this contest after losing their opening Group A match to England.

It was yet another difficult day for Mickey Arthur's team ahead of the Ashes series which begins on 10 July.

Captain Michael Clarke remained in London having treatment on a long-standing back injury, and there was further disruption to the squad - this time self-inflicted - as details emerged of Warner's alleged "unprovoked attack" on England batsman Joe Root in a Birmingham bar, which resulted in the Australia opener being placed on 12th-man duties to carry drinks of a different kind.

This followed the 26-year-old's recent fine for comments made on Twitter, and four members of the squad being disciplined over "Homework-gate" during the 4-0 whitewash in India this year.

Their run of ill fortune briefly abated when Australia won the toss but soon returned as two wickets fell in the first 19 balls.

Phil Hughes was run out for a duck by a Martin Guptill direct hit after hesitation between the batsmen, and Daniel Vettori bowled tidily with great variations of flight and pace to concede just 23 runs in 10 overs, despite a troublesome Achilles that left him hobbling in the field.

Stand-in Australia skipper Bailey played with an effectiveness that was particularly commendable given the trying circumstances surrounding his team.

Unspectacular both in shot selection and demeanour, Bailey calmly restored order in a partnership of 64 with Matthew Wade and then 77 in 16 overs with the purposeful Voges.

In his 18th ODI, 33-year-old Voges - yet to play a Test and not part of the Ashes squad - struck the ball crisply in a 76-ball innings that ended in the 44th over when he drove a McClenaghan full toss to short extra-cover.

Glenn Maxwell added an enterprising unbeaten 29, featuring the only two sixes of the innings, both of which came in the penultimate over, bowled by spinner Kane Williamson.

It took Australia to a total that had been overhauled only three times in 20 previous ODIs at the ground.

With the floodlights on in the increasing gloom, New Zealand's task became more difficult when Guptill sliced Clint McKay to point in the fourth over and Ronchi - who played two ODIs for Australia in 2008 but who now has only 45 runs in five innings for the Kiwis - steered the same bowler to gully.

But rain intervened and the match was finally called off at 18:23 BST, meaning reigning champions Australia must beat Sri Lanka in their final match on Monday to have any chance of continuing their defence of the trophy.