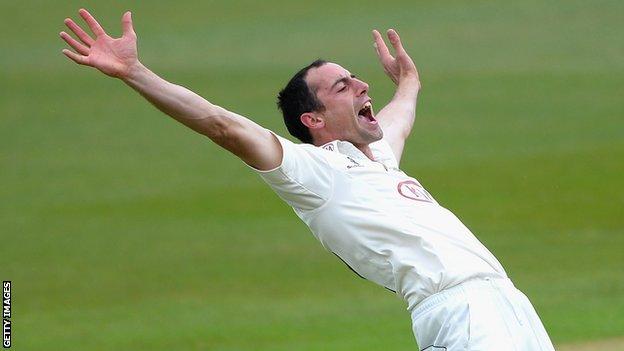 Seam bowler Tim Linley led the way with 4-68 as Surrey bowled out leaders Sussex for 295 with a disciplined and determined performance at Arundel.

Michael Yardy made 69, while five other batsmen passed 30, but none produced the major innings required.

England's Matt Prior was dropped twice in the deep, only to depart for 38 when he fell to spinner Zafar Ansari.

With both sides looking to make up time after the first day wash-out, Surrey ended on 1-0 after four overs in reply.

Despite losing Luke Wells early for three after being put in, Sussex made a solid start, Yardy and Chris Nash adding 51 before the latter drove Linley to cover and was caught for 32.

It was a similar story as skipper Ed Joyce (36) added 61 with Yardy before giving Linley a return catch, which he brilliantly held one-handed. And Prior failed to capitalise after being put down by Arun Harinath at fine leg on 18 off Jade Dernbach, who then dropped him at deep square leg on 25 off Chris Tremlett when he top-edged an attempted sweep.

Once Yardy had fallen lbw to Zander de Bruyn, the onus was on in-form Luke Wright, who got to 41 before being caught at second slip by former Australia skipper Ricky Ponting from an angled delivery by Tremlett (2-74).

Thereafter it was a case of squeezing as many runs out of the lower order as they could, but Linley's dismissal of Jordan ensured they fell short of a third batting point.

"This was an absorbing day of Championship cricket with honours just about even, and a fascinating third day in prospect.

"Having been asked to bat, the leaders will be disappointed to have missed out on a third batting point by just five runs, but delighted to have posted a respectable total on a wicket offering some help to the bowlers.

"However, having lost a whole day yesterday through rain, it did seem ridiculous that play finished at 6.40 under clear blue skies and bright sunshine."