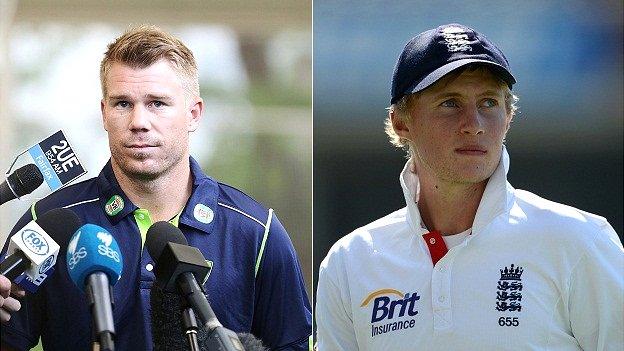 Australia opening batsman David Warner is being investigated over claims of an unprovoked attack on England's Joe Root.

Cricket Australia said he was involved in an alleged physical altercation in a bar hours after Saturday's loss to England at Edgbaston.

The ECB said Warner had apologised for an "unprovoked physical attack".

In a statement, the ECB added: "Following a full investigation, the England team management has concluded that the England player was in no way responsible for nor retaliated to the attack.

"Warner has admitted behaving inappropriately and has since apologised to the player involved who has accepted the apology.

"ECB has concluded that this is a matter for Cricket Australia and have no further comment to make."

Australian team management have stood down Warner - who was described as having "great potential to be a leader of the Australian cricket team" by current captain Michael Clarke in May - pending the outcome of a full hearing.

"David Warner has history. He is a kid from the back blocks, who has a lot of talent.

"He is vital to the team, although he has no form at all in his last 10 innings and it is a while since he last made some runs.

"He is the one player alongside Shane Watson who can give some momentum to an innings. So, without Michael Clarke, it will be a big loss."

BBC Radio 5 live's Pat Murphy said: "I believe it happened around 02:00 (BST) at the Walkabout bar in the centre of Birmingham.

"There was a private VIP area and some of the Australia players were in there. The three England players, Joe Root, Stuart Broad and Chris Woakes, were some way away and were larking around - wearing silly wigs and that.

"I understand Warner took umbrage and went over to Root and glanced him on the chin.

"I am hearing that Broad put his arm around Root as soon as it happened and said 'time to go back to the hotel' and I am also told that they were not worse for wear.

"One thing that is important to say is that since 13 May the England players, particularly Root and Broad, have not had a day off.

"The evening of the eighth of June was identified as down time. The matter is closed as far as the ECB is concerned."

England captain Alastair Cook defended his team-mates, saying he believed the squad as a whole had "not done anything wrong".

"Our conduct as England players is vitally important," the 28-year-old said. "We are aware of the position we hold as players. It is a matter we have taken seriously as well."

"We didn't have training for a few days, so we had a couple of days off.

"You do not often get those in a tournament, so it is important you let your hair down and celebrate wins."

Warner has been reported for "unbecoming behaviour" after potentially breaching rule six of the governing body's code of behaviour.

It states that representative players or officials must not engage in conduct "that could bring them or the game into disrepute or be harmful to the interests of cricket".

Cricket Australia says it will not make further comment until after a hearing, a time and date for which have yet to be confirmed.

Australia, who are already without Clarke because of a long-standing lower back injury, replaced Warner with Glenn Maxwell for Wednesday's game against the Black Caps at Edgbaston.

Warner struggled in his side's opening loss to England, scoring only nine runs in 21 balls before he was caught by Jos Buttler off the bowling of Stuart Broad.

He also failed to score in warm-up games against India and West Indies.

In one-day internationals, Warner averages 29.81 from 38 innings, with a strike-rate of 80.58, while in Tests, he has made three centuries and seven fifties in 19 appearances, averaging 39.46.

Yorkshireman Root has excelled since making his debut for England with a patient first-innings 73 in the drawn fourth Test against India last December.

This is the second time in three weeks Warner has been in trouble with authorities.

The tweets, some containing obscene language and which Warner later apologised for, appeared after a journalist criticised the Indian Premier League (IPL) in an article which used a picture of him.

The game in Birmingham between England and Australia was the start of a hectic schedule in which they will meet in home and away Ashes Test series, as well as Twenty20 and one-day international fixtures.

England will begin the defence of the Ashes at Trent Bridge on 10 July.