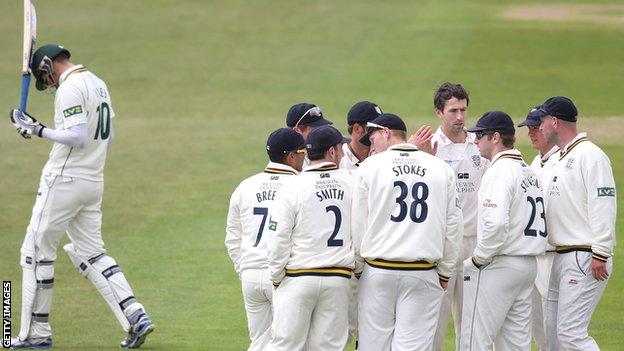 England T20 opener Alex Hales has been dropped for Nottinghamshire's four-day match with Derbyshire this week.

Hales has scored only 30 runs in his last eight Championship innings and was out for a duck in the Second XI match with Derbyshire on Tuesday.

Director of cricket Mick Newell said: "It came to the point where we felt we'd given Alex enough opportunity to find his form which hasn't happened.

"It happens to players in the course of their careers."

The 24-year-old, who received this week, averages 11.83 in Championship cricket this season.

"It's important that we get off to better starts in red-ball cricket so we had to make a change," added Newell.

"It's important that he gets runs in the second team and comes back in with confidence, because I think that's lacking at the moment."

Andre Adams, who has been sidelined by a calf injury since April, returns, while Riki Wessels is named in a squad of 12 and is likely to replace Hales at the top of the order.

Cowan will make his final Championship appearance of the season before departing for Ashes duty with Australia.