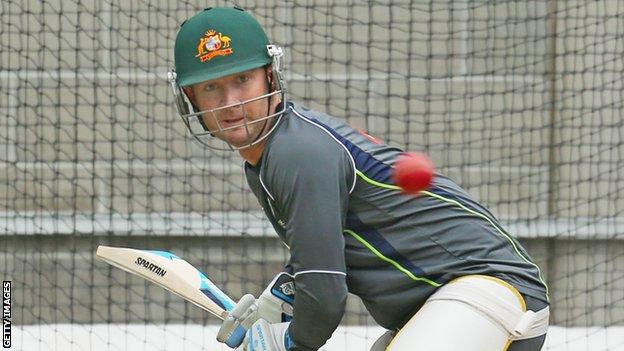 Australia captain Michael Clarke has been ruled out of his side's second Champions Trophy group match against New Zealand on Wednesday.

Clarke, 32, has been struggling with a lower back injury and missed the opening 48-run defeat by England.

"While he is making good progress, he has not improved sufficiently enough to play the game against New Zealand."

Clarke missed Australia's last two warm-up matches because of the long-standing problem, which also forced him home in March from a 4-0 series defeat against India.

He said: "I am concerned but confident we will have him firing somewhere in this tournament for us and then into the Ashes."

The Champions Trophy is a one-day international tournament featuring eight teams that runs between 6 and 23 June. The first Test of the five-match Ashes series begins at Trent Bridge on 10 July.