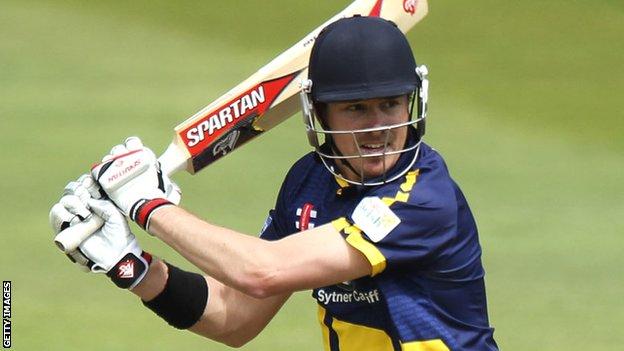 The Welsh county drew a high-scoring game with Gloucestershire in Bristol and followed that up with an 85-run win over Unicorns in the Yorkshire Bank 40.

That was Glamorgan's first win in any format for just over a month.

"We're so close. The display with bat and ball against Gloucestershire was very good, very disciplined and if we can do that again over four days we'll certainly be competing for that win."

Glamorgan's only win in the Championship this season came against Worcestershire in April.

Since then they have been beaten by Lancashire and Essex and drawn with Leicestershire and Gloucestershire.

But, in contrast to last season, the Welsh county have been competitive in all their matches.

North says the improvement this year has been a collective effort, though his fellow Australians Jim Allenby and Michael Hogan have attracted special praise.

Hogan, in his first season in Wales, has taken 34 wickets at an average of 17 in the Championship, while Allenby is averaging 70.14 runs with the bat

"They've been fantastic all year, haven't they?" said North.

"It was a great signing with Hoags [Hogan] - he's been excellent, really led the attack and then Jim Allenby is just continuing on his fine form from last year.

"He's such a valuable player for us. You know to have a guy who bats in your top six and scoring the runs he does and also contributing so much with the ball.

"But I think all the guys are playing pretty good, there's a good feeling around here and they're really motivated to do well."

North will be available for the match against Kent despite leaving the field with a shoulder injury against Unicorns on Sunday.