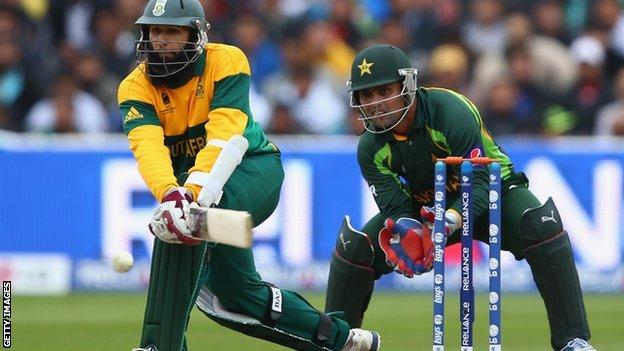 Hashim Amla's 81 and a disciplined bowling display gave South Africa a 67-run win that pushes Pakistan to the brink of Champions Trophy elimination.

But, chasing what was no more than a par score on a slowing Edgbaston pitch, Pakistan were restricted to only 167.

South Africa could reach the semi-finals with a win over West Indies, while Pakistan must beat India.

"Pakistan came into the tournament with question marks over their batting. Two games in, there's still question marks all over it. In the end a very comprehensive victory for South Africa. Pakistan have got some work to do even if they're going to threaten in the next game."

West Indies first meet India on Tuesday, with the winner of that game well placed to secure a last-four spot.

Both South Africa and Pakistan were defeated in their opening games of the tournament but, while the Proteas, and their bowlers in particular, showed great improvement at Edgbaston, Pakistan displayed familiar failings.

Seam pair Lonwabo Tsotsobe and Ryan McLaren, who conceded 153 between them in the loss to India, went for only 42 in their combined 17 overs, while Chris Morris - in for the injured Morne Morkel - impressed on debut as the attack compensated for the batsmen's earlier failure to capitalise on a sturdy start.

After Amla shared stands of 53 with Colin Ingram and 59 with Du Plessis, the Proteas faltered badly, scoring only 112 runs in the final 22 overs - despite having nine wickets in hand.

That was down both to sharp Pakistan fielding and another strong showing from a bowling unit that almost rescued Misbah-ul-Haq's side after they were bowled out for 170 in the defeat by the Windies.

On that occasion, only Misbah and Nasir Jamshed reached double figures, and it was that pair on whom Pakistan again relied in Birmingham.

Displaying an early caution that invited pressure, Pakistan saw Imran Farhat lose his off stump and Mohammad Hafeez caught on the hook - Morris the bowler on both occasions - before JP Duminy crept an off-break through Shoaib Malik's defence.

Misbah joined Jamshed with only 48 on the board in the 18th over and the scoring rate was upped before Jamshed offered a return catch to Tsotsobe on 42.

Misbah sought to consolidate after the wicket and was booed by some parts of the partisan Birmingham crowd, but as the captain attacked during the batting powerplay, Umar Amin and Kamran Akmal fell in the same McLaren over - Akmal to a sharp catch by Du Plessis at point.

Misbah continued his aggression, only to shovel Tsotsobe to Amla at mid-wicket for 55, effectively ending the contest. McLaren ran through the tail for figures of 4-19.

"As a batting unit, we can say we are totally lost," said Misbah.

The insipid chase only served to highlight the importance of Amla's earlier contribution and the costliness of Amin's drop at point when the right-hander was on seven.

That was one of several fierce cut shots from Amla, who was also adept at working through mid-wicket and moving across his stumps to negate the Pakistan spinners.

Reverse sweeps were also a feature of his play, but brought his downfall as he gloved Saeed Ajmal to Hafeez at short third man shortly after Du Plessis miscued a hook off Mohammad Irfan into the covers.

De Villiers announced his arrival by pulling Malik over the mid-wicket fence. However, his dismissal - run out in a mix-up with Duminy - was a signal of things to come.

Duminy, Morris and Aaron Phangiso all went to direct hits as Robin Peterson and David Miller provided some rare late boundaries but Amla had already made the telling contribution.

"We didn't have a lot to defend," said Amla. "But the way we fielded and bowled up front made 230 seem a lot more than it was.

"In this competition, if you lose the first one you are pretty much under the pressure to win the next two. Fortunately we got on the board."