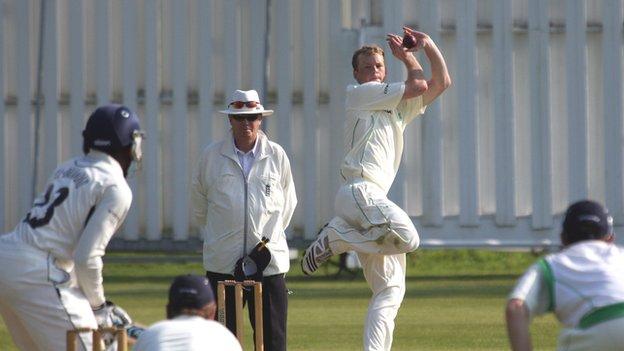 Coleraine teenager Scott Campbell has received his first call-up to the Ireland squad for the four-day game against Australia A at Stormont.

The 19-year-old left-arm spinner is named in the 14-man squad for the match which starts on Friday..

Waringstown's Phil Eaglestone, the top wicket-taker in Irish domestic cricket this season, returns to the squad.

The majority of Ireland's English county contingent are unavailable including skipper William Porterfield.

Campbell gets his opportunity to impress Ireland coach Phil Simmons having been understudy to George Dockrell, with whom he played in the Under-19 World Cup in Australia last year.

"Scott is the next spinner in line behind George. He has impressed me when I have watched him bowl for Ireland A and the Under-19 side," said Simmons.

"Games against real top quality opposition will be vital for him in his cricketing development and will help him improve.

"I have said before that four-day cricket is where players really learn how to play the game."

Kevin O'Brien will skipper the Irish side in the game while young Stuart Poynter has been named wicket-keeper for the clash.

"It is always an honour to lead your country and I am extremely proud to have been given the opportunity," said Railway Union all-rounder O'Brien.

"It will be tough against a team with 10 Test players and seven of their Ashes squad."

The Australians were in dominant form over the weekend as they completed a 360-run win against Scotland in just three days.

Skipper Brad Haddin and Peter Siddle scored centuries, while there were seven wickets in the match for fast bowler James Pattinson.