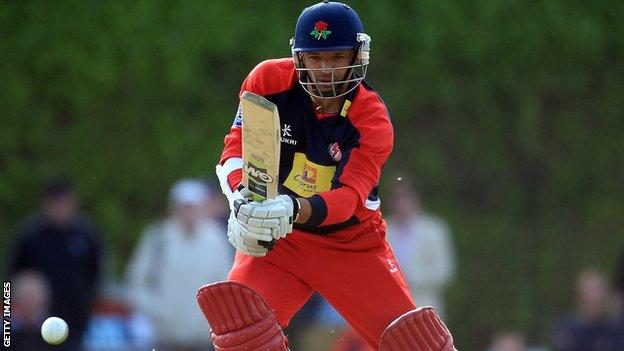 Lancashire batsman Ashwell Prince says their five-wicket win at Surrey was vital to their hopes of progressing out of the YB40 group stage.

The 35-year-old South African hit 76 as they achieved only their second victory in six games in the competition.

"We had to win, it was a must-win game, but almost every games is a must win game for us obviously having lost a few," he told BBC Radio Lancashire.

However, the result left them second bottom in Group B, above Scotland.

After putting Surrey into bat at Guildford, Stephen Moore and Simon Katich each took a superb one-handed catch as Lancashire restricted the hosts to 264-8 and then chased down the target in the 38th over.

"Fair play to our bowlers as we fought back really well and there were a few outstanding pieces of fielding from Moore and Kat," Prince added.

"Those two pieces of fielding obviously helped us a lot as it changes the momentum of the game .

"We realise that these two games down south will be two big games for us, we've got the first one ticked off so hopefully we'll be able to tick another one off at Essex on Sunday."