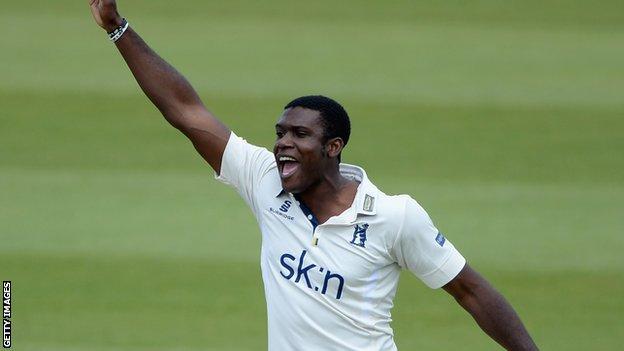 Keith Barker finished with four wickets as Warwickshire bowled Durham out for 267 on day one at Chester-le-Street.

The medium-pacer mopped up the tail, taking the wickets of Mark Wood and Chris Rushworth to end with impressive figures of 4-41 from 19.5 overs.

Warwickshire had enough time to begin their reply, but closed on 31-1 when Ian Westwood fell to Graeme Onions.

After winning the toss and electing to bat, Durham lost opener Mark Stoneman to the influential Barker with only the second ball of the day.

However, the hosts' other opener Keaton Jennings (33) managed to build a platform alongside Scott Borthwick (36), before both fell when they looked well set.

Jeetan Patel (3-68) took arguably the biggest scalp of the day, having former England international Paul Collingwood caught by Varun Chopra for only one run, while Phil Mustard fell to Rikki Clarke (3-37) for a duck.

After Barker polished off the Durham tail, reigning county champions Warwickshire made strong running off their 6.3 overs before Westwood was caught by Rushworth to leave them still 236 runs in arrears at stumps.

"As long as the weather stays favourable over the next three days, the draw looks like the least likely result on this pitch. Having won the toss Durham would have wanted a bigger total, but they're probably not far short of par.

"Ben Stokes' 61 was entertaining but no Durham batsman was able to apply themselves for the sort of big innings that could win a game like this."