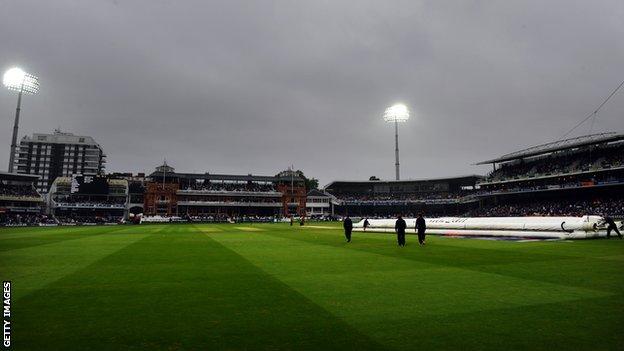 Alex Lees struck his first Championship century to give Yorkshire a platform on a rain-affected opening day at Lord's.

Having won the toss and elected to bat, Middlesex's Tim Murtagh (1-55) had Adam Lyth caught by Neil Dexter for 11, shortly after the opener had passed the 4,000-run mark in Championship cricket.

Gareth Berg then dismissed Phil Jaques (20) to leave the visitors on 70-2.

The hosts were dealt a further blow when seamer James Harris was forced off just 4.3 overs into his opening spell with a side strain.

And Lees made the most of Middlesex's weakened attack, compiling his steady unbeaten century off 286 balls, striking 11 fours, despite the distraction of having to leave the field on five separate occasions during the day's play because of rain and bad light.

"A few eyebrows were raised when Yorkshire chose to bat first under cloudy skies at Lord's, but a defiant and unbeaten maiden Championship century for Alex Lees backed up the decision.

"The 20-year-old's innings was streaky and filled with inside and outside edges, however, not a single chance went to hand and, for that reason, no one can begrudge Lees his moment.

"His performance was even more admirable due the fact that the cloud cover remained throughout the day and play was constantly interrupted by bad light and rain.

"His captain, Andrew Gale, was far more assured for his unbeaten fifty, while Middlesex will not feel that they bowled badly but, much like last week, they were toiling on a flat track.

"The new ball will be available three overs into the second day and the hosts will know there is a chance to fight back, but another day like today will see Yorkshire claim an unassailable position in the game."

"Yet another youngster comes to the party for Yorkshire, with 20-year-old Alex Lees notching up his first County Championship century.

"The Tykes keep on producing young talent. On Sunday last they paraded a 15-year-old bowler, and now Lees looks another one for the future.

"Yorkshire have bossed the first day in front of their President Geoff Boycott - and he knows a good player when he sees one."