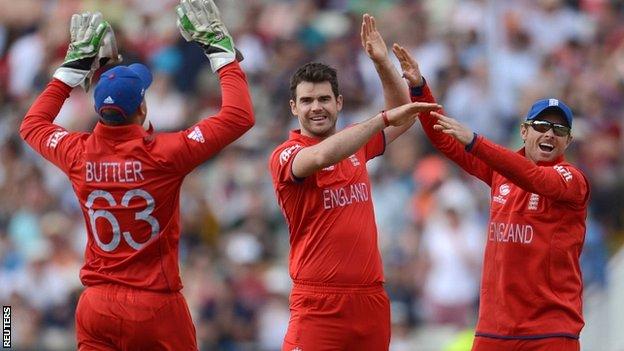 Gough claimed 234 wickets in 158 matches but Anderson took three wickets during Saturday's Champions Trophy win against Australia to move to 237.

"It was a very special moment breaking a record like that," said Anderson, 30.

"And beating someone like Darren Gough, who was a hero of mine growing up, makes it more special."

Ronnie Irani, Gareth Batty and James Kirtley were in the England team when Anderson made his England ODI debut against Australia in Melbourne 2002.

"It doesn't feel like that long ago but I'm just delighted to be still playing for England," he told BBC Sport.

His first wicket was a notable one, legendary wicketkeeper-batsman Adam Gilchrist, who was bowled for 124 after a 104-ball innings which included 12 fours and four sixes, although Australia still won the match by an 89-run margin.

"It wasn't the best ball I've bowled," admitted Anderson, who has played 170 one-day internationals for England.

The Lancastrian said Yorkshireman Gough, who played his last match for England in 2006, was an important figure in his development.

"I just tried to soak up everything from him and the rest of the guys that were in the dressing room when I first started."

Anderson is now the figurehead of the England bowling attack in Test and one-day matches, having recently equalled Fred Trueman's record of 307 Test wickets behind only Ian Botham and Bob Willis in the England all-time list.

"I turn up to practice every day trying to improve myself as a cricketer and hopefully I'll continue to get rewards," added Anderson.

"I enjoy the responsibility of talking to the other guys about bowling and trying to help out when I can. All the bowling attack try to not just concentrate on their own game but also look out for each other."

England began their Champions Trophy campaign with a 48-run victory against the Australians at Edgbaston and also face Sri Lanka and New Zealand in Group B.

"We know in a group of four you've got to win two out of three games to have any chance of progressing," Anderson said. "There's no margin for error if you want to go far in the tournament so we're delighted we've started in such a good fashion."