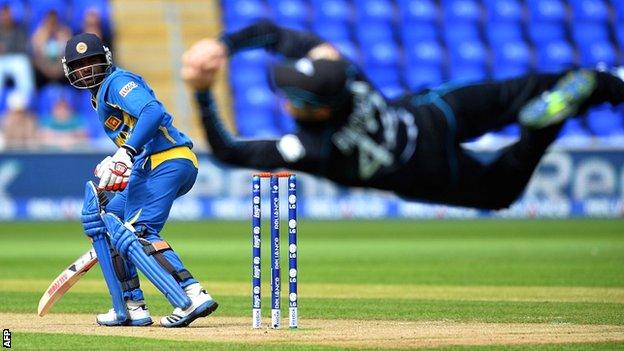 New Zealand battled to a one-wicket victory against Sri Lanka in a magnificent low-scoring Champions Trophy Group A encounter in Cardiff.

Kyle Mills struck with the first ball of the match and the Sri Lankans soon slipped to 34-4 in the ninth over.

Kumar Sangakkara made 68 but Sri Lanka were all out for 138 in the 38th over.

The Kiwis lost three wickets for one run in eight balls but despite 4-34 from the mercurial Lasith Malinga they edged to victory in the 37th over.

Both teams gave further examples of their ability to inspire and implode in almost equal measure and Group A, also including England and Australia, looks likely to be keenly contested over the next week.

Perennial over-achievers New Zealand, winners in 2000, semi-finalists in 2006 and runners-up in the last tournament four years ago, have already beaten England this summer and seemed certain for victory after dismissing Sri Lanka for the lowest ODI total at Cardiff.

Sri Lanka came close to achieving the lowest defence of a total in an ODI in England and Wales but were made to pay for another dire batting display at Cardiff, scene of their 82 all out on the final afternoon of the first Test against England in May 2011.

While the team has witnessed several changes in recent years, the retirement of star spinner Muttiah Muralitharan with his 1,334 international wickets the most notable, the bulk of their high-calibre batting remains in the form of Tillakaratne Dilshan, Mahela Jayawardene and Sangakkara.

But on the pitch used for Thursday's opening match of the tournament between India and South Africa they found it difficult to settle from the very first delivery when Brendon McCullum leaped full length high to his left at slip to grab Kusal Perera's edge.

Daniel Vettori dismissed Jayawardene in his last one-day international more than two years ago and a one-over spell was all he needed to remove the prolific batsman again.

The effects of his Achilles tendon troubles left the 34-year-old less than balletic in the field but his shrewd slow left-arm bowling gave the Kiwis an important extra ingredient.

When Lahiru Thirimanne was run-out after finishing at the same end as his partner, Sangakkara angrily dispatched the following three balls to the boundary.

However, pressure from the New Zealanders ensured the former captain was left with the quandary of merely playing out the overs with the tail or trying to accelerate the dwindling run rate, and he sliced Nathan McCullum to point as the innings swiftly folded.

Such was the alacrity of Sri Lanka's demise that the New Zealand innings was required to begin half an hour before the scheduled interval and in that time paceman Shaminda Eranga tempted Luke Ronchi to edge behind.

In bright afternoon sunshine it seemed the Kiwis would comfortably tick off the remaining runs but a slower ball full toss from unorthodox paceman Malinga completely perplexed Kane Williamson, who was plumb lbw, and triggered a collapse.

Martin Guptill, who made successive unbeaten centuries against England, was caught at slip for 25 and Ross Taylor was lbw without scoring but after two more wickets fell, man-of-the-match Nathan McCullum struck two fours in three balls to alleviate some pressure.

He made a crucial 32 and the McCullum brothers took their team within 24 runs of the target in a 10-over partnership of 35 that seemed like a century in the circumstances, before the irrepressible Malinga returned for a third spell.

Varying between express pace and disguised slower balls at a fraction of the speed, all delivered with the unique angles of his action making the ball appear from behind the umpire's back, Malinga dismissed both in consecutive overs with unbeatable inswinging yorkers.

Numerous decisions would have been referred in the tension but both teams had used their one review some time previously, although the umpires called for a replay to determine Kyle Mills had been run out with five still needed.

Tim Southee negotiated Malinga's final over and the Kiwis edged over the line courtesy of a leg-side wide from Dilshan.

"I was incredibly nervous at one stage," said Kiwi captain Brendon McCullum. "Sri Lanka are always a dangerous side and we panicked a bit in the middle.

"It was very important to scrape through. We have enough experience to deal with situations like this, although it did get tough towards the end."

Counterpart Angelo Mathews lamented: "We probably needed 30-40 more runs. This was not the 200-run wicket that we originally thought, but we still need to toughen up a bit.

"Malinga almost won it for us. We have two more games and we need to tighten up in batting. The bowlers and fielders showed good character."