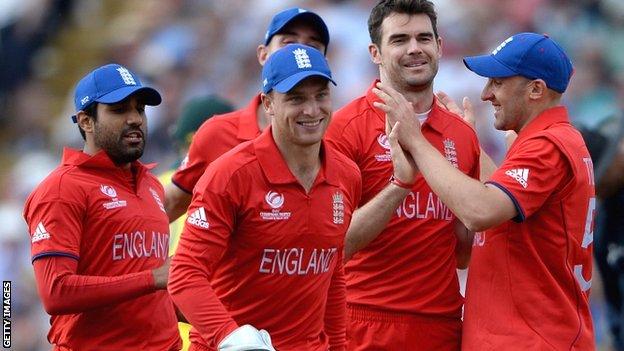 James Anderson led an exceptional bowling display as England opened their Champions Trophy campaign with a 48-run victory over Australia at Edgbaston.

Ian Bell's measured 91 was the cornerstone of England's 269-6, while Jonathan Trott made 47 and Ravi Bopara supplied late impetus with 46 not out off 37 balls.

Despite 55 from stand-in skipper George Bailey and James Faulkner's lusty unbeaten 54, Australia laboured to 221-9 on a largely blameless surface.

Victory not only gave England the early advantage in Group A after the first of their three round-robin games, but served as an early psychological blow against Australia before the Ashes start next month.

However, one suspects Sri Lanka, at The Oval on Thursday, and New Zealand will pose a stiffer test than an Australia team that were bowled out for 65 in their final warm-up game and were missing injured captain and best batsman Michael Clarke here.

There remains room for improvement for England - a middle-order collapse threatened to undermine a promising start with the bat and two catches and a stumping, albeit tough, went begging - but coach Ashley Giles can be pleased with their performance in front of an exuberant crowd basking in the Birmingham sunshine.

The skills exhibited by Anderson and company, who found reverse swing that eluded the Australia seamers on a dry yet flat surface, rendered the debate over England's total redundant after they wasted a start that saw them reach 168-1 having won the toss.

Stuart Broad located David Warner's edge early on and Bresnan had Shane Watson taken at gully via inside edge and pad for 24 in one of four maidens bowled in the first 15 overs of Australia's reply.

Phil Hughes had twice been reprieved by the time he was lbw for 30 attempting to pull Joe Root's part-time off-spin, and Bailey's resourceful contribution became increasingly futile as four wickets tumbled for 24 runs in 27 balls.

The exceptional Anderson was central to that collapse, accounting for Mitchell Marsh and Matthew Wade in an over that saw him surpass Darren Gough, on 234 wickets, as England's most prolific bowler in one-day cricket.

Adam Voges was bowled by Bresnan and Bailey hoisted Tredwell to long-on either side of that; Mitchell Johnson - jeered all day - skied a Bopara full toss to point; and Anderson capped another record-breaking day by cleaning up the third Mitchell in the Australia side. Faulkner's 38-ball half-century was all but irrelevant.

Man-of-the-match Bell and Cook batted with as much fluency as anyone in the game in adding 57 for the first wicket before the skipper was caught chasing Watson.

Steady accumulation was the principal feature of Bell and Trott's 111-run alliance for the second wicket, although the fact they managed a combined five fours in 22 overs suggested scoring was not as easy as many observers initially expected on a pale, dry surface.

Both teams now have 25 wins, with two ties and one no-result

The most notable feature of Trott's innings was a verbal exchange with Wade after he inadvertently impeded the Australia wicketkeeper, but any sense that England's momentum would improve with his departure proved premature as five wickets fell for the addition of 45 runs.

After Trott wafted at a Starc delivery which would have been called wide had he missed it, left-armer Faulkner arced one back to bowl Bell, then Root clipped the impressive Clint McKay tamely to midwicket in the next over.

Eoin Morgan was bowled round his legs as he stepped across his stumps to McKay, and a leaden-footed Jos Buttler played on driving at Faulkner two balls later.

With England's ambitions of reaching 300 long since revised, it was left to Bopara - mixing the occasional drive over the top with sprightly running - and the muscular Bresnan to carry them to a total that proved more than adequate.

Australia were fined for a slow over-rate after it was ruled they were one over short of their target at the end of the match when time allowances were taken into consideration. Skipper Bailey was fined 20% of his match fee while his players received 10% fines.