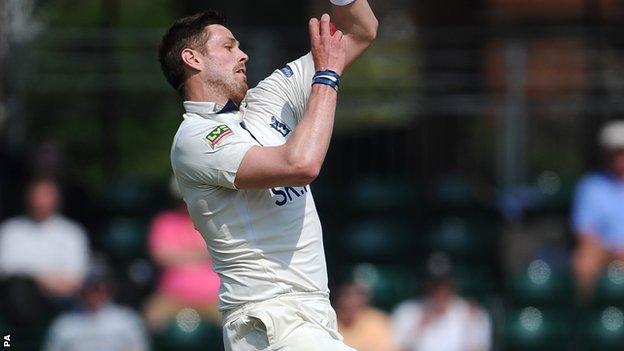 Warwickshire were frustrated as they failed to take the 13 final day wickets needed to beat Surrey at Guildford.

Surrey's first innings misery continued when they lost their final three wickets for just five runs and were forced to follow on 357 behind.

But the Bears managed only four second innings wickets as Surrey saw out the draw on 234-4, Rory Burns making 85.

The visitors remain winless in Division One this season but are one position behind the sixth-placed Bears.

Warwickshire's aim was hampered by the absence of leading wicket-taker Chris Wright, who had to leave the pitch through illness.

But Surrey were under real pressure when, after resuming on 269-7, they quickly collapsed early on in the morning session.

After Boyd Rankin had quickly added to his three scalps the evening before by removing Chris Tremlett, Keith Barker took the final two wickets.

The prized scalp of former Australia captain Ricky Ponting, who added just two to his overnight score to be out for 52, was followed four balls and two runs later by Jade Dernbach.

Having duly followed on, Surrey quickly then lost Arun Harinath to Jeetan Patel, but former Worcestershire captain Vikram Solanki came in to help calm Surrey nerves with a stand of 66 in 28 overs either side of lunch with Burns.

Solanki fell for 18, caught behind off Boyd Rankin, before Burns eventually edged Rikki Clarke to end his superb 191-match vigil.

There was time for Patel to take Zander de Bruyn but Ponting (38 no) and Gary Wilson (28 no) saw the hosts through to safety.

"Although there was no repeat of Surrey's first innings collapse to give them a victory, Warwickshire were pleased with their work here and with good reason.

"Keith Barker and Ian Westwood returned from injury and came straight into good form, Varun Chopra was back to his smooth best, Boyd Rankin was quick and effective and Ateeq Javid made his biggest contribution to date.

"Collectively they looked more like the unit that won the Championship, and dictated terms throughout. On this form they should not be discounted in the title race."