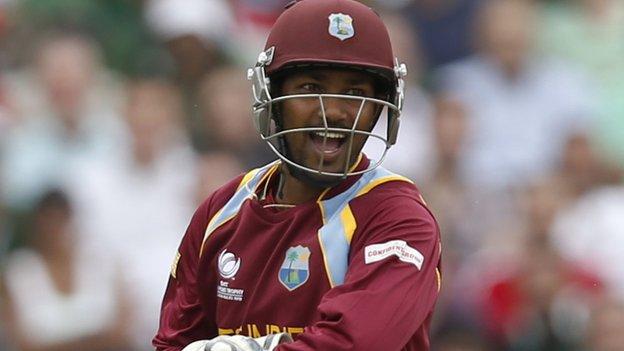 West Indies' Denesh Ramdin has been charged with "conduct contrary to the spirit of the game" for claiming a dropped catch during his side's match against Pakistan on Friday.

Wicketkeeper Ramdin claimed the catch off Misbah-ul-Haq, despite the ball touching the floor.

Ramdin has pleaded not guilty and a hearing will take place on Monday.

If found guilty he could face a fine and a suspension of up to two one-day international matches.

Speaking on BBC Test Match Special at the time of the incident, former England wicketkeeper Alec Stewart said: "Denesh Ramdin has got to take a good look at himself there.

"That's excellent umpiring to spot it, but for Ramdin not to say he's dropped that ball is wrong.

"It's obvious he's dropped it, and that's poor sportsmanship."