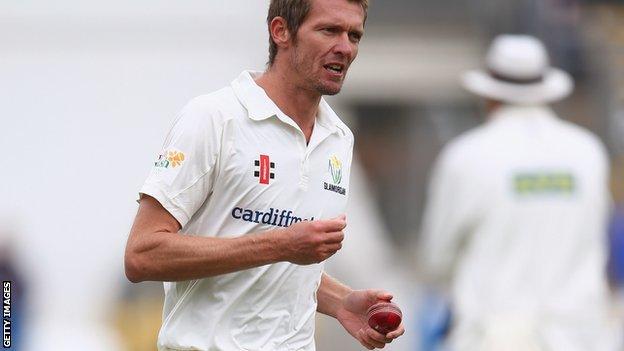 Michael Hogan claimed a career best 7-92 as Gloucestershire and Glamorgan played out a draw on the final day of their Division Two match at Bristol.

Resuming on 456-4, Gloucestershire added just 22 more runs before being dismissed with Hogan taking five wickets for 13 runs in 32 balls.

Opener Will Bragg hit an unbeaten 71 to help the Welsh side reach 176-2 before declaring and settling for a draw.

"It all went wrong for Gloucestershire from the very first ball of the day when Hamish Marshall was caught behind.

"The long tail then capitulated to Hogan, and the plan to score a quick 800 and give them a lead of around 100 was in tatters.

"Glamorgan showed absolutely no signs of being in trouble so the game petered out to a tame draw, with Michael Klinger perhaps rueing earlier decisions not to offer Glamorgan a run chase with a declaration behind the visitors' first innings total."