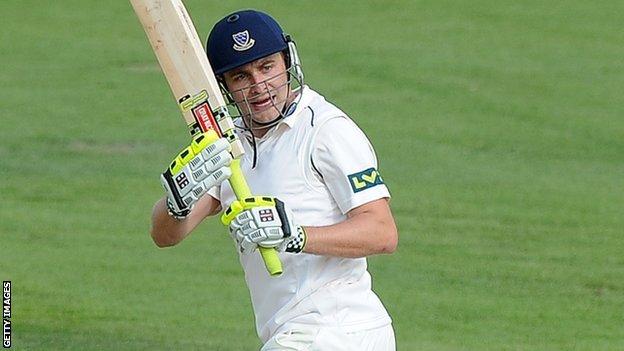 Luke Wright's career-best 187 salvaged a draw for Sussex against Middlesex in a top-of-the table clash at Lord's.

Middlesex were left with 178 to chase from 20 overs but the draw was agreed after they found themselves 50-3 with 12 overs remaining.

Sussex collected five points to remain top of Division One, while Middlesex closed the gap to five with 10 points.

England Twenty20 international Wright, starting the day on 48, was in determined mood and added 159 for the fifth wicket with Ed Joyce (98), who fell to Tim Murtagh, and then a further 101 for the eighth wicket with Tim Beer (39).

Sussex lost Ben Brown and Chris Jordan (both 3), caught off James Harris and Murtagh respectively, between those partnerships,

Wright, surpassing his previous best of 155, was finally stumped when coming down the pitch to Joe Denly.

Steve Magoffin pulled a long hop from Denly to mid-wicket to bring the Sussex resistance to an end.

But Middlesex did not have the time to mount a serious chase and lost Denly, Neil Dexter and Gareth Berg before the captains shook hands.

"A remarkable game which after nearly four days ended in a Twenty20-style shoot-out.

"Sussex will feel this is like a win, to play below par for three days and salvage a draw was a terrific achievement, retains their unbeaten start to the season, and denies a rival county precious points.

"Luke Wright's innings, a career best, saved the day but credit to Will Beer, he provided staunch support to Wright in both innings, and gives cricket manager Mark Robinson a pleasant selection problem ahead of the game at Arundel next week against neighbours Surrey."