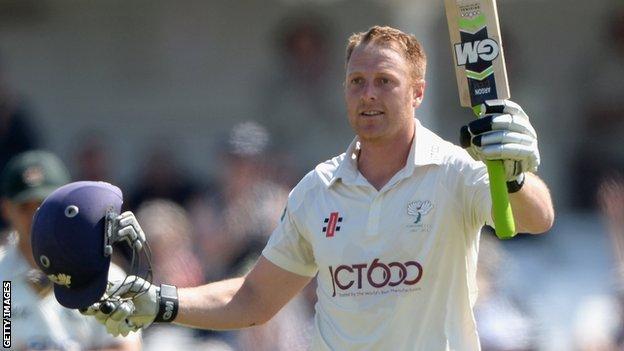 Andrew Gale hit a sublime 272 in a nine-hour stand for Yorkshire, who could only draw with Nottinghamshire.

Starting the day on 159, Gale added to his career-best score before Yorkshire declared on 572-8, 129 clear of their opponents' first innings tally.

And Yorkshire could only take the wicket of Notts opener Alex Hales, lbw by Steven Patterson, before the draw was agreed with the visitors 105-1.

Yorkshire are now level on points with Division One leaders Sussex.

Dewsbury-born Gale, 28, notched a series of notable achievements with his knock, the 13th highest in the county's history and third highest since World War II.

It also ended a shaky spell for the captain, whose effort contained 62 runs more than he had made in his previous nine Championship innings this season combined and included 25 fours and four sixes.

Gale was finally dismissed when, noticeably tiring, he miscued Samit Patel high towards point and found wicketkeeper Chris Read, before declaring with his side's best-ever score against Notts.

But with just 46 overs remaining, and despite the early scare of losing Hales, Notts pair Ed Cowan and Michael Lumb steered the visitors safely through to the close.