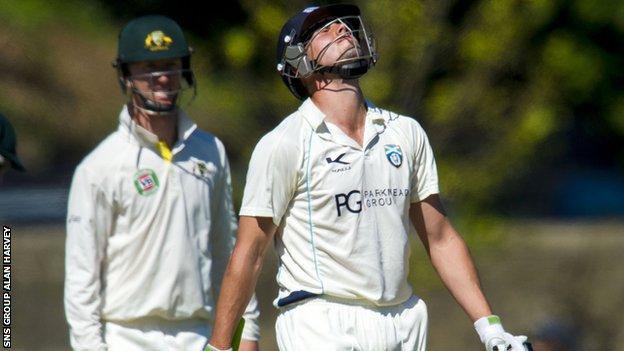 James Pattinson has told Scotland not to be despondent despite the seamer claiming seven scalps for 37 runs in a thumping Australia A victory.

The Scots' stand-in captain, Preston Mommsen, questioned the value of a match that lasted just over half of the scheduled four days in Edinburgh.

"They have got some fantastic players coming through and I was surprised by what they offered."

The Scots managed to score only 149 and 93 in their two innings against the Aussies' second string as the tourists added to their first innings total of 372 for eight by declaring for a second time on 230 for five.

However, Australia included five players who can expect to see action in this summer's Ashes series in England, as Pattinson was joined by wicket-keeper Brad Haddin, bowlers Peter Siddle and Nathan Lyon and batsman Usman Khawaja in Scotland's capital.

It was a good measure to see where we are in comparison to the best teams in the world. It's quite clear we are not at the same level they are at

And Pattinson, who has played in 10 Tests, said: "Their bowling was quite good and their batting showed glimpses.

"It was definitely worthwhile for us.

"And I'm sure Scotland will take something out of playing against good-class players."

Mommsen, captaining the home side in the absence of Kyle Coetzer, claimed it might have been more beneficial had the game at the Grange been played under a limited-overs format.

"Individually, we just weren't good enough," he said. "It's a blow.

"It's been a good experience playing against such quality players.

"It was a good measure to see where we are in comparison to the best teams in the world. It's quite clear we are not at the same level they are at.

"One thing we can't hide away from is the fact we don't play a lot of red-ball cricket. We play a lot of one-day stuff and T20s with a white ball.

"It's a very different game when the ball is swinging and nipping about. Your batting skills have to be up to scratch.

"Is there any value for us then in playing a four-day game? That's a good question.

"When we are playing a big team like this, you might ask why aren't we playing them in a one-dayer?"

Australia had resumed on Sunday on 164 for four with a massive 387-run lead following another dominant display against the Scots on Saturday.

The visitors started by pushing their advantage on past 450 within little more than an hour of play commencing before deciding that was a large enough lead and handing the crease over to their hosts.

Another meek batting display followed by the Scots, with only Calum MacLeod (30) notching up a respectable knock.