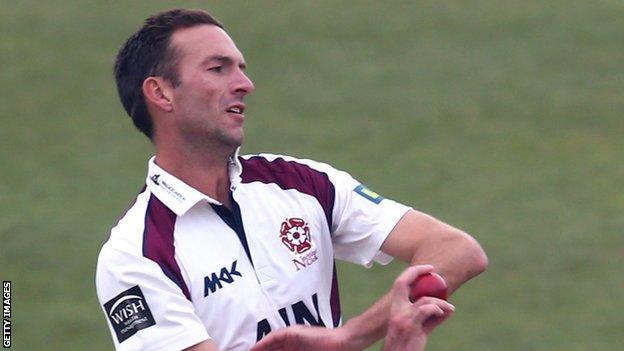 Australia bowler Trent Copeland has said he would return to Northamptonshire later this season, but only if everything "falls into place".

The 27-year-old finished his Northants spell with figures of 9-92 in this week's and has taken 27 wickets from six County Championship Division Two matches.

And he has played through that spell with an ongoing ankle injury.

"If it all fell in place I'd love to return," he told BBC Radio Northampton.

"Take everything else out of the equation, like my coach back home, the schedule, my ankle, my wife - there's a lot of things that need to fall into place."

Copeland will now return to Australia to rest and find out if he requires surgery on his ankle, before preparing for a domestic season with New South Wales.

The seamer, who has three Test caps, has contributed heavily to Northants' rise to the top of the table, where they are 44 points clear, complimenting his bowling average of 18.25 with a batting average of 55.33.

"If I get the chance to come back I will. But if not I'll be watching at home, hopefully seeing the boys getting promoted," he said.

"Having contributed to getting the boys so close to sniffing that promotion I'd love to be back here when that gets solidified.

"I made a decision and you've got to stick with it. My priority has to be back home with the domestic season and I've got to get my body right for that.

"I'd be silly to think I could play a whole season over here with a lingering ankle injury."

The belief around Wantage Road is that Copeland's form has been good enough to attract the attention of Australia's Ashes selectors, should the first-team squad suffer any withdrawals through injury.

"I haven't thought about it too much. There's a lot of people talking about it," said Copeland, whose last Test appearance was a draw in Sri Lanka in September 2011.

"If I got into the Australian set-up that would be great, but my priority is to get my body right."