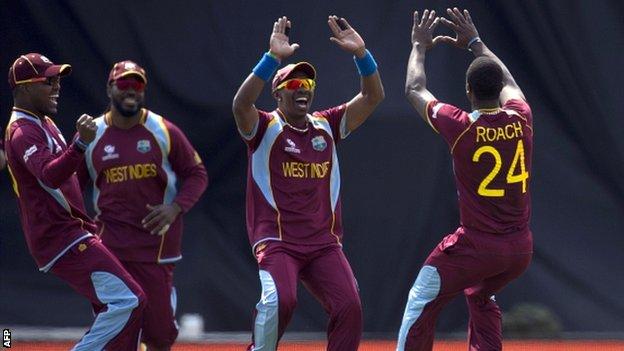 West Indies edged out Pakistan by two wickets in a low-scoring Champions Trophy Group B match at The Oval.

Dropped on nought, Misbah was denied a maiden ODI ton as the innings ended in the 48th over, Kemar Roach taking 3-28.

Chris Gayle made 39 but the low target caused problems for the Windies, their tail inching home with 56 balls left.

Cricket's flamboyant enigmas may not have produced the flurry of runs expected but served up an intriguing encounter for the large London crowd.

The vast majority of them were fervently supporting Pakistan and even the most optimistic would not have expected anything akin to a contest after such a paltry total.

Given the start, Asad Shafiq's decision when on nought to play an upper cut off Roach straight into the hands of Ravi Rampaul at third man was particularly baffling. The situation plummeted further when Misbah appeared to have edged to Denesh Ramdin in Roach's next over.

The wicketkeeper, who held up a handwritten response to criticism from Windies legend Sir Viv Richards after making a century against England last year, took the inside edge cleanly but the ball escaped from his gloves and rolled on to the turf, which was spotted by square-leg umpire Nigel Llong when Ramdin inexplicably claimed the catch.

It was really enthralling, gripping cricket. I was really impressed with the quick bowling from both sides, Kemar Roach for the West Indies, Irfan, Junaid Khan, Wahab Riaz bowled with good pace, it was a good contest.

New captain Dwayne Bravo was marshalling the Windies expertly with some attacking fields, but Roach was removed from the attack after taking 3-7 in six overs and Misbah began to rebuild in partnership with left-hander Jamshed.

Misbah struck Kieron Pollard straight down the ground for six in the 24th over and a reverse sweep off Sunil Narine brought up Pakistan's 100 from the final ball of the 28th over.

But the Pakistan self-destruct button was activated yet again with two wickets falling in an over, Jamshed holing out to long-off and Shoaib Malik clipping to mid-wicket first ball.

Wickets continued to fall and 10 overs elapsed without a boundary but Misbah delighted his followers with majestic sixes down the ground in consecutive overs from Rampaul and Narine.

His intelligent combination of attack and defence in perilous circumstances was deserving of a century but the 39-year-old, in his 118th ODI, was stranded four runs short when the giant Irfan lobbed a simple catch to short-leg.

But in his more favoured role with the ball Irfan, the 7ft 1in left-armer, nudged 90 mph and caused some unease with two early wickets in as many overs, his contest with the West Indian batsmen providing a great spectacle.

Gayle thumped him emphatically down the ground for six in the seventh over and successive fours in his next over forced the paceman out of the attack.

Having taken his team within 93 of victory, Gayle swiped at spinner Saaed Ajmal off the final ball of the 17th over and was bowled by a ball turning in for 39.

In the next over left-arm seamer Wahab Riaz, also around the 90mph mark, generated great pace and bounce to take the edge of Ramnaresh Sarwan to leave West Indies on 81-4.

Big-hitting T20 specialist Pollard looked uncharacteristically hesitant against Ajmal, with only a single from the first 23 balls of his innings.

With so much time left, West Indies seemed content to pick off the runs unspectacularly but Marlon Samuels could not resist an attack at Hafeez and was stumped for 30 to make it 94-5.

Pollard struck Hafeez down the ground for six and a crunching drive to the extra cover boundary off Wahab reduced the requirement to 34.

But more lift from Wahab accounted for the burly all-rounder for 30 and the tension increased when Bravo (19) was lbw attempting to sweep Ajmal.

Narine (11) looked as though he would take his team to victory but after two boundaries and with only six needed he became Irfan's third victim when he got a faint edge to a rising ball outside off-stump.

Fittingly it was man-of-the-match Roach, whose opening spell did so much to put his team in the ascendancy, who settled it with a cover drive over the in-field for four.

Pakistan skipper Misbah lamented: "We lost too many wickets at the top but I am happy the way the bowlers bowled.

"They bowled their heart out and it was worthwhile seeing. We just need to rectify the small mistakes. A little bit more effort could have taken us home."

A relieved Bravo said: "It was a close game and good to get it out of the way. Hopefully, we can build from this tough situation. We wanted to get the best out of the bowlers and then backed our batters to chase the target.

"Pakistan bowled in the right areas and it was difficult to play against. Playing at the Oval is like a home game for us, we really enjoy playing here and hopefully against India it will be another cracker."