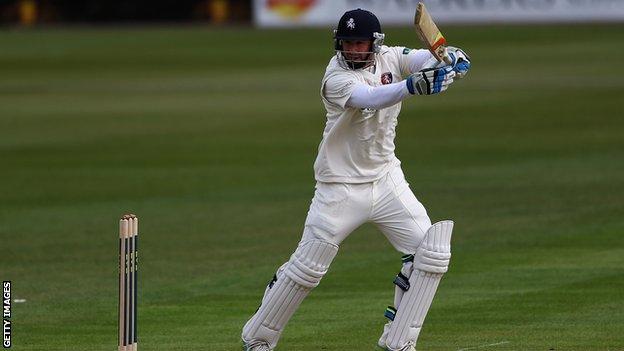 Kent's stand-in captain Geraint Jones tried to set up a final day victory chase with a bold declaration against Hampshire on day three of their match.

The visitors resumed on 149-4 and after the early dismissal of Brendan Nash, Ben Harmison (63) and Darren Stevens (60) put on 102 for the sixth wicket.

He received useful support from first innings centurion Neil McKenzie (27) and James Vince (23no) and with a lead of 232, the chances of a positive result for either side will depend on Hampshire's willingness to leave Kent a run-chase as the visitors seek their first victory of the season.

"As brave decisions go, this was right up there as Geraint Jones declared Kent's first innings in an effort to chase a first County Championship win of the season.

"He had that opportunity once Kent had avoided the follow-on thanks to half centuries from Stevens and Harmison.

"Hampshire's skipper, Jimmy Adams, may have had some alarms as Hampshire lost early wickets, but this is all about how many runs in how many overs and what Adams might think he needs to bowl Kent out.

"The final day promises to be an entertaining one."