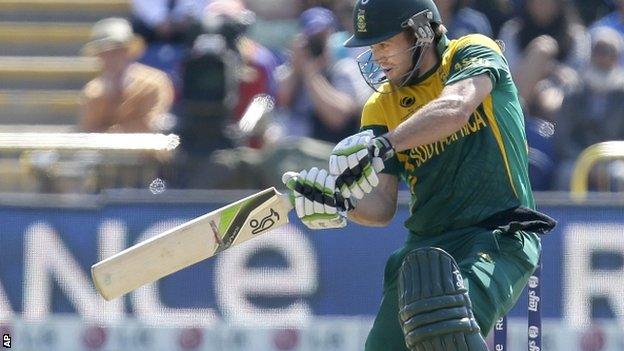 South Africa captain AB de Villiers remained optimistic after his team's 26-run defeat against India in the opening match of the Champions Trophy.

"With the bat we got ourselves in a great position to win," De Villiers said. "We just ran out of wickets.

"I thought we adapted really well and fought back. The game was in our hands, we'll take a lot of positives from it."

De Villiers opted to bowl first at Cardiff, where none of the 10 teams batting first had previously won in a one-day international.

Dhawan and Rohit Sharma shared an opening stand of 127 in 21 overs to inspire a large Indian total.

"It was an emphatic performance by India. They out-batted, out-bowled and, in particular, out-fielded the South Africans. That is a first - to out-field South Africa.

"To be fair, South Africa are depleted, but India are a team in transition. Hence this victory is of the utmost importance. They have made great strides with their fielding and their running between the wickets was exceptional."

De Villiers told BBC Sport: "I wasn't too down, I still felt 300 was a par score so they were a little bit above par but, with the batting we have, I felt we were in with a chance.

"A couple of good partnerships I felt would get us close, we got those but unfortunately couldn't extend them a bit longer and that cost us.

"A couple of run outs cost us as well but we take a lot of learning out of this game."

Asked whether his team had been guilty of throwing a winning opportunity away after losing seven wickets within 19 overs he said: "It's not really throwing it away.

"In the heat of the game you're trying to give your best for the team and unfortunately sometimes there is a bit of mis-communication out there, due to some good fielding from them keeping the pressure on us, not letting us get easy ones. So it's good cricket from them as well.

"The stats tell you that so many teams win bowling first here and we had to go with that, it just looked there might be a bit of nip first thing in the morning but unfortunately there wasn't enough for us."

The South Africans also have injury concerns over Dale Steyn, who missed the match with a side strain, and Morne Morkel, was was unable to complete his allocation of overs.

"Unfortunately Morne and Dale are in a bit of trouble, two of our key bowlers," De Villiers added. "Hopefully in the next few days they'll recover, Both are very close to being fit but maybe are just not there."

Centurion Dhawan, who made the fastest debut Test century in March, was delighted to score his maiden one-day international century in his sixth match.

"It's a great feeling for me and my team and lovely to get a man-of-the-match," he said.

"We got a very good total, when wickets fall the run rate comes down but we were happy with the total."