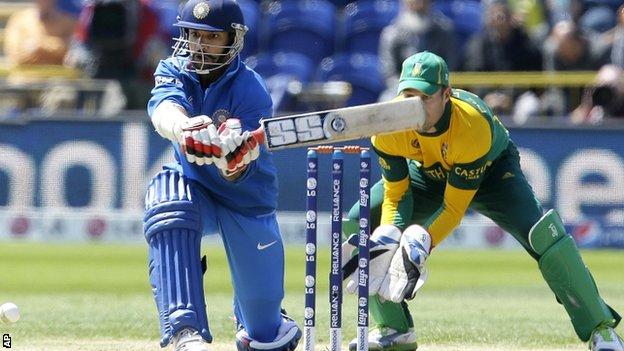 World champions India began their Champions Trophy campaign with a 26-run victory over South Africa in Cardiff in the first match of the tournament.

Shikhar Dhawan (114), who hit the fastest debut Test century in March, struck his first ODI hundred and shared a stand of 127 with Rohit Sharma (65).

Ravi Jadeja made a rapid unbeaten 47 as India posted 331-7 having been put in.

"I hope that's a flavour of what we're going to get - both teams scoring over 300; it was just the job. That 26-run margin doesn't do justice to the way India dominated the match."

South Africa were without fast-bowling spearhead Dale Steyn, ruled out by a side strain, and with key all-rounder Jacques Kallis opting to miss the tournament for personal reasons, it left the onus on giant paceman Morne Morkel.

His probing opening four-over spell cost only eight runs but the support bowlers were less accurate and were seized upon by the India opening pair of Dhawan and Sharma, Lonwabo Tsotsobe one of three to go for in excess of seven and a half runs per over.

After being hit for six over cover by Sharma and conceding 21 from his first three overs, Tsotsobe returned but was skilfully upper cut over the vacant slip cordon for four by the dexterous Dhawan, who then skipped down the wicket to hit the big left-arm seamer high and handsomely straight down the ground for another maximum.

Dhawan might have been caught on 27 when Morkel wandered too far in from the boundary and the ball sailed over his head but bounced inside the rope, while combative all-rounder McLaren clattered the helmets of Dhawan and Virat Kohli.

But in general the South Africa attack provided few alarms for the batsmen and their problems escalated when Morkel was forced to leave the field with a thigh injury midway through his seventh over.

Dhawan reached his century with successive boundaries square of the wicket on either side but the cavalier left-hander should have been stumped in the next over off JP Duminy as De Villiers, no doubt feeling the strain of seeing the ball dispatched to all corners, snatched at the opportunity and fumbled.

India's 200 arrived in the 34th over with only one wicket down but there was a relative lull as three wickets fell for 30 in five overs, Dhawan's fine innings ended by a smart catch from substitute fielder Aaron Phangiso at square leg.

Jadeja hit the final two balls of the innings for four and his breezy 29-ball knock ensured India were some way ahead of the previous highest ODI score at Cardiff, the 304-6 they made against England in 2011, and that South Africa's target was considerably higher than the record chase at the ground, 258-3 by Australia against Pakistan in 2001.

Although the prolific Hashim Amla fell early in South Africa's reply for 22, getting an inside edge off Umesh Yadav in the fourth over having hit 14 off the previous four balls from the inconsistent seamer, Peterson and De Villiers helped South Africa to 77-2 after 10 overs, 24 ahead of India at the same stage.

Peterson, batting at three for only the fourth time in his 69 ODI matches, advanced to his maiden fifty from as many balls and with De Villiers playing a succession of sweetly timed high-class strokes, the contest was delicately poised.

"It was an emphatic performance by India. They out-batted, out-bowled and, in particular, out-fielded the South Africans. That is a first - to out-field South Africa.

"To be fair, South Africa are depleted, but India are a team in transition. Hence this victory is of the utmost importance. They have made great strides with their fielding and their running between the wickets was exceptional."

The partnership was ended midway through the 25th over when Jadeja highlighted India's improved fielding with a diving stop and throw to wicketkeeper Mahendra Dhoni that beat Peterson's attempt to return to his crease.

Spin was keeping the runs to a minimum but it was the returning Yadav who claimed the crucial wicket of De Villiers, whose charge down the pitch resulted in an uncharacteristically ungainly shot that ballooned to mid-wicket.

There was still hope in the form of big-hitting David Miller but he was unable to demonstrate his talents after being run out without facing a ball when a dreadful mix-up resulted in both batsmen trying to make their ground at the same end.

However, with two of India's seamers going for more than eight an over, Faf du Plessis and McLaren recorded a fifty stand in only 27 balls and it was with no shortage of relief that Suresh Raina clutched a lofted drive from Du Plessis at mid-off.

Left-hander McLaren recorded his maiden ODI fifty from 40 balls with some bold strokes and shared a final-wicket stand of 48 with an incapacitated Morkel, who was bowled by the final ball of the match for eight.

The improvement that made to South Africa's run rate may yet prove significant with only two qualifying from the four-team group.