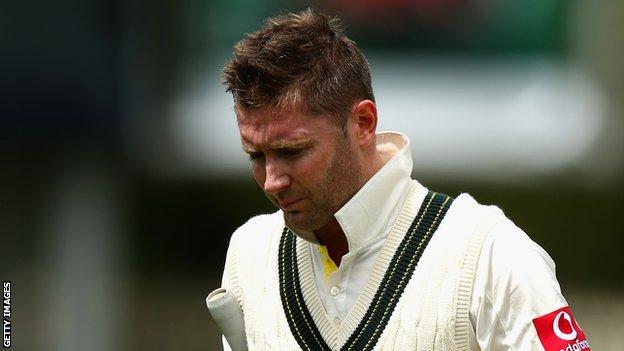 Former England captain Allan Lamb believes Australia have "difficult times" ahead and predicts they will suffer a 3-0 Ashes defeat this summer.

Lamb, 58, was speaking after former Australia spinner Shane Warne questioned the make-up of his country's squad for the five-Test tour.

"I don't think England are going to have a problem. I would say 3-0," Lamb told BBC Look East.

"England's players are not talking about it but they can sense blood."

Australia have got difficult times coming up. I don't think it's a gelled side

The first Test starts on 10 July at Trent Bridge as Australia attempt to secure their first Test series win on English soil since 2001.

They will then host England in a return Ashes series, starting at The Gabba on 21 November.

Lamb, who was born in South Africa but played 79 Tests for England between 1982 and 1991, winning two Ashes series, believes Australia have "got a few problems".

"Looking at that Australia side it whets my appetite a little bit because it's always the Aussies saying they're going to give us a 5-0 but they've been very quiet," he said.

"Never write off an Australian side. But looking at that side on paper, I don't think you'll have any sleepless nights over it.

"They've got (Michael) Clarke and (Shane) Watson but the rest are inexperienced. With six left-handers, (Graeme) Swann will be licking his lips.

"But you can't write them off because they're fighters and won't throw the towel in."

Australia's one-day side suffered a humiliating 243-run loss to India after being bowled out for 65 in their final warm-up match before facing England in their opening game of the ICC Champions Trophy at Edgbaston on Saturday.

India completed a 4-0 home Test series whitewash over Australia in March in a tour that saw four players dropped for disciplinary reasons.

"I sense there isn't that unity in that side," said Lamb, who has been appointed to the board of Northamptonshire. "They had all those problems when they sent players home from India. Has the coach gelled a side together? It seems like there are some issues with some players and the coach.

"Australia have got difficult times coming up. I don't think it's a gelled side. A lot of the former players don't feel like they've picked the right side. All this affects the players.

"When you play Australia you want to win. I don't care if they're underprepared or don't have the stars they had. Australia will feel the same and will want to come here and win. That spices it up."