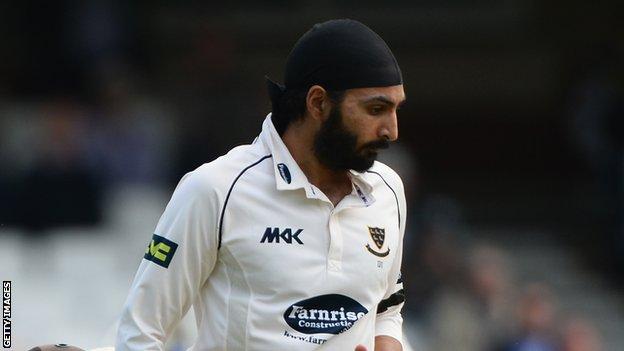 Sussex cricket manager Mark Robinson hopes time out of the team will allow Monty Panesar to come back stronger.

The 31-year-old spinner was omitted from the side to face Middlesex.

Robinson told BBC Sussex: "I think Monty has struggled by his own admission this season and hasn't got into the rhythm himself.

"We felt that allowing him to work with [coach] Mark Davis on his action would get that back to how he wants it to be."

Panesar joined Sussex ahead of the 2010 season after losing his central contract with the England and Wales Cricket Board in September 2009.

The left-armer has taken more than 50 wickets in each of the last three seasons for the Hove outfit and returned to the England Test side in January 2012.

He featured in the tours of India and New Zealand this winter and signed an incremental contract with England in March.

However he has been carrying a shoulder injury this season and has only taken nine wickets at an average of 54.11 in his six County Championship appearances.

"He's also had a cortisone injection in his shoulder to help alleviate a bit of pain there," Robinson added.

"What is the best thing for Monty? Is it to give him a break or to work him through his current difficulties?

"Hopefully, he'll be more pain-free and working on his action will get him back to how he'd like to bowl and how we'd like him to bowl."