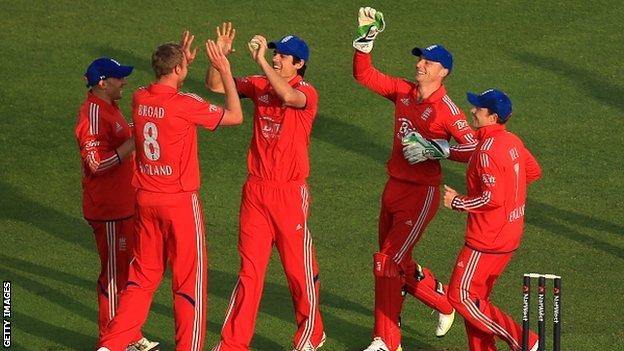 Alastair Cook hailed England's response as they ended the one-day series with a win over New Zealand at Trent Bridge.

Defeats at Lord's and Southampton meant the series was lost but Ian Bell's 82 plus 47 not out in 16 balls from Jos Buttler set up a 34-run victory.

"We haven't quite got it right in this series, we've been operating at about 75%," England captain Cook admitted.

"But here we showed a lot of character and the different balance of the side worked well."

England rested key bowlers James Anderson and Graeme Swann ahead of their first Champions Trophy match against Australia on Saturday but spinner James Tredwell claimed the key wicket of Martin Guptill and finished with 3-51.

"We're very lucky to have two very good spinners and they could operate together. Jos's knock was the difference between the sides and it was great to see Ravi [Bopara] play well too."

Bopara scored 28 runs and conceded 21 runs in his six overs.

Buttler was named man of the match after sharing 62 in just 24 balls with Eoin Morgan (49) and the wicketkeeper said: "I got a good opportunity with a licence at the end of the innings to go out and express myself.

"The pitch was a little bit slower than we expected but we got to a good score and defended it well. It's nice to contribute to a winning performance and hopefully there are many more to come."

New Zealand skipper Brendon McCullum was full of praise for Buttler's innings, as England amassed 76 from the final four overs.

"We were good for the majority of the game but there were two periods, Buttler's innings was world class and to concede 76 off four overs, the other part was losing 4-20 through the middle, but other than that our performance was really good and showed if we can execute our plans we're a good side," he said.

"We possess some destructive players and England do as well, but overall we take a lot of confidence and look forward to the Champions Trophy."

Ross Taylor gave New Zealand hope with three sixes in his 71 before he was the ninth wicket to fall.

"We got off to a good start, but we kept losing wickets at crucial times - maybe if we were only five down at the powerplay, we could have had a chance," he said.