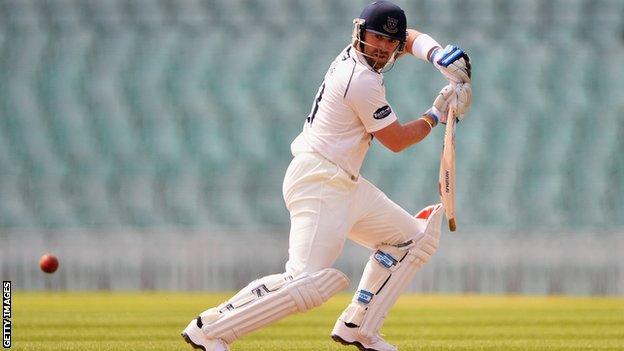 England wicketkeeper Matt Prior was controversially given out as leaders Sussex struggled against Middlesex.

Prior was caught low by Sam Robson but indicated to the umpires with his bat that he believed the ball had hit the ground; Sussex eventually made 147-7.

Captain Rogers (184) added 23 to his overnight score while Dexter moved from 62 to 104 before Middlesex declared having reached 499-8.

Prior's dismissal left the visitors on 92-5 and in danger of suffering their first defeat of the season against the only other unbeaten team in the division.

Although England's player of the year was given out, several of Middlesex's close fielders did not vociferously appeal for the dismissal.

Middlesex began the day on 320-3 and after Rogers and Dexter were out, some late order hitting, including 50 by wicketkeeper John Simpson, and the sacrificing of wickets took them to just short of 500.

Sussex closed the day 352 runs adrift and in danger of being made to follow-on on day three.

"A thoroughly miserable day for the Championship leaders, whose unbeaten start to the season is now in serious jeopardy

"From the moment Ed Joyce won the toss and asked Middlesex to bat, Sussex have been on the back foot and Chris Rogers side have relentlessly ground down their opponents.

"The controversial dismissal of Matt Prior may well make the headlines, but that shouldn't detract from a powerful Middlesex display which should see them return to the top of the Championship."

"Middlesex off-spinner Ollie Rayner was a constant threat on an ever drying pitch that is already offering plenty of turn but it was the Middlesex seamers' line and length that reaped reward.

"Matt Prior was clearly unhappy with his dismissal, appearing to point at where he believed the ball bounced in front of short leg Sam Robson, and the England wicketkeeper may not have heard the last about his animated protestations during a delayed departure from the crease.

"The incident clearly unsettled Sussex, as conversations appeared to continue into the following overs, with Ben Brown in particular looking rattled before he charged down the pitch and got out..

"Saving the match is far from impossible for Sussex but overall, in a match against potential title rivals, their performance has been below an acceptable level so far.