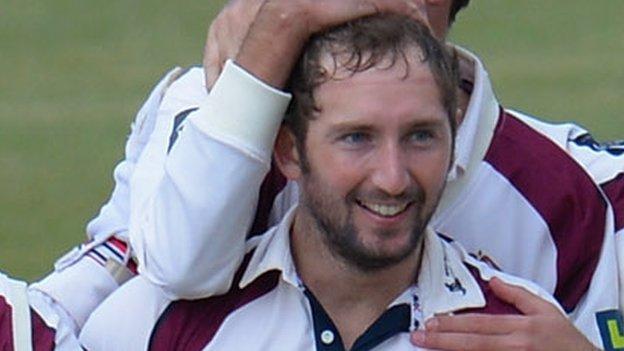 Australian Steven Crook got away with an early let-off to hit a match-turning innings of 87 for Northants against Worcestershire at Wantage Road.

After resuming on 100-4, the home side lost two quick wickets to be left still 62 runs in arrears.

But, after Crook was put down when on six by Aneesh Kapil, the home side recovered to total 314 - a lead of 118.

Crook's fellow Aussie Trent Copeland then took three wickets as the visitors slumped to 97-6 at the close.

Worcestershire, who still have Moeen Ali and Gareth Andrew at the crease, will resume on Friday morning still needing another 21 to make the home side bat again - but looking likely to suffer a three-day defeat.

"Three of the umpiring decisions had elements of doubt, but the home side reaped the rewards of good line and length.

"After three more wickets for Trent Copeland, only Worcestershire's Alan Richardson is above him in the Division Two wicket-taking stakes.

"If Northants win, they will be 44 points clear of third place after just seven matches."

"A day dominated by Northants, after Aneesh Kapil had put down Steve Crook when he was on six.

"Crook then set about the Worcestershire attack at a run a ball - and the support he got earned Northants their lead.

"Chris Russell deserved his three tail-end wickets, while Alan Richardson was again the pick of the Worcestershire attack."