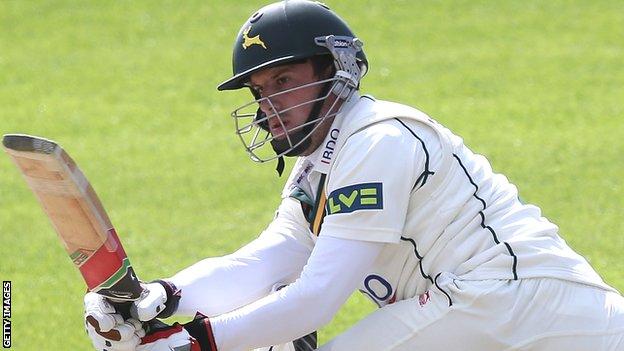 The visitors resumed on 177-2 and Michael Lumb (135) added only 19 to his overnight score, before being dismissed by Steven Patterson (3-74).

Notts had stumbled to 275-6 but Steven Mullaney's knock and 70 from Paul Franks helped push them to 443 all out.

After Patterson accounted for centurion Lumb, the momentum began to swing Yorkshire's way with Samit Patel (17) and James Taylor (38) falling in the two overs before lunch.

Notts had found scoring tough on day one and had the same problem in the morning session, but Mullaney changed that for a time in the afternoon, smashing two sixes and 11 fours in his 97-ball innings.

Mullaney and Franks put on 87 for the seventh wicket at more than five an over, scoring at double the run rate of any other point throughout the innings.

Franks brought up his half-century with a six off Rich Pyrah, but was dismissed by Adil Rashid (3-98) for a 108-ball knock which also included six fours.

Fletcher's unbeaten 25 from 24 balls helped Notts equal their highest score of the season against Derbyshire in April.

Notts claimed three early wickets in reply as Gurney had Adam Lyth caught at slip by Patel for seven and Fletcher trapped Alex Lees leg before for two.

Nightwatchman Patterson was caught behind by Chris Read, while Phil Jacques ended the day unbeaten on 19.