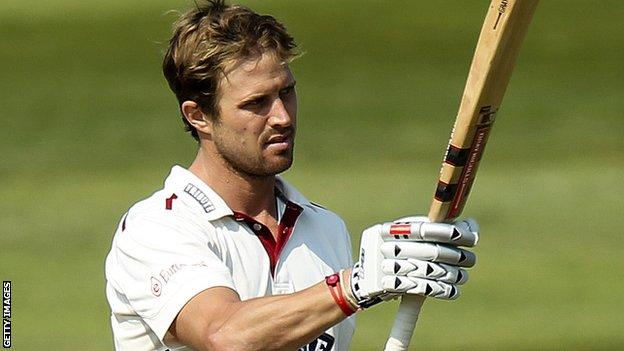 The England opener, who struggled for form in the Test series against New Zealand, dug in after Graham Onions (2-43) got rid of Marcus Trescothick and Arul Suppiah, who both made 36.

Dean Elgar (33) fell to part-time spinner Will Smith in his only over.

James Hildreth (32) and Alex Barrow (25) also contributed, while Peter Trego hit two fours in reaching 14 not out by the close of play.

Compton responded to England coach Andy Flower's comments that he must show form for Somerset to nail down his place in this summer's Ashes side.

Having won the toss, the home side chose to bat and Compton looked like a man low on form as Trescothick made almost all of the early scoring until Scott Borthwick took a smart catch at second slip.

After reaching lunch on just 23, the England opener seemed to grow in confidence despite Suppiah and Elgar failing to capitalise on good starts, and by tea he was just eight short of his century.

Hildreth was trapped lbw by Ryan Buckley to become the fourth man to reach 30 runs and then depart, while Barrow was a hit away from doing the same before being clean bowled by Mark Wood.

"That was a long hard day in the field for Durham. It wasn't a good toss to lose on the hottest day of the year.

"And it was just their luck Nick Compton had a point to prove as well.

"However his progress was slow. His 100 took more than 200 balls, but he has been the mainstay of the Somerset innings.

"Things may have been different if Paul Collingwood had not dropped him at slip on 53 off Ryan Buckley.

"It is Compton's 20th first-class century and third against Durham."

"Nick Compton responded in the way he always responds: very watchful and mindful.

"I thought it was an outstanding effort for him under a lot of pressure.

"A lot of credit goes to him in the strength he's shown to deliver under so much pressure.

"He's certainly on the pathway to being back where he was before."