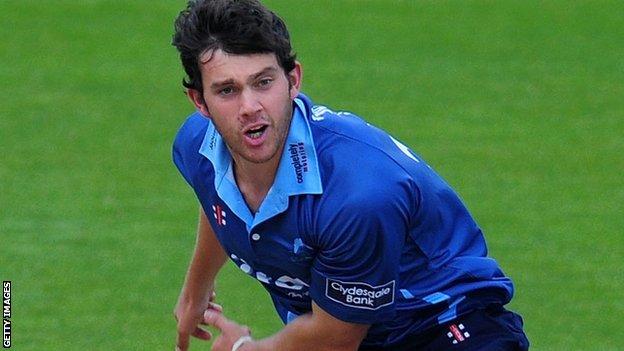 Gloucestershire director of cricket John Bracewell has admitted he is worried their Twenty20 form will be affected by the absence of Ed Young.

All-rounder Young is to undergo an operation on Friday on a wrist injury which will keep him out of action for at least four weeks.

"He's been our most consistent T20 bowler for the last two seasons," Bracewell told BBC Gloucestershire.

"It is a concern going into the T20 without a specialist spinner on our books."

Young took four wickets in the competition last year and finished with an economy rate of 5.80.

The 24-year-old joins Chris Dent in the treatment room, while fellow spinner Jack Taylor is currently suspended from bowling while the England and Wales Cricket Board investigate his action.

Gloucestershire have called up teenage off-spinner Miles Hammond, who deputised for Young against Yorkshire, for Wednesday's Championship game against Glamorgan.

However, Bracewell does not want to rely on the 17-year-old in the T20 and could now look to bring in loan players as cover.

"It's too much pressure to ask of him," Bracewell said of Hammond, who had to get permission from his school to play this week.

"I haven't had time to sit down and talk about the finances yet and it's something we are going to have to look at."