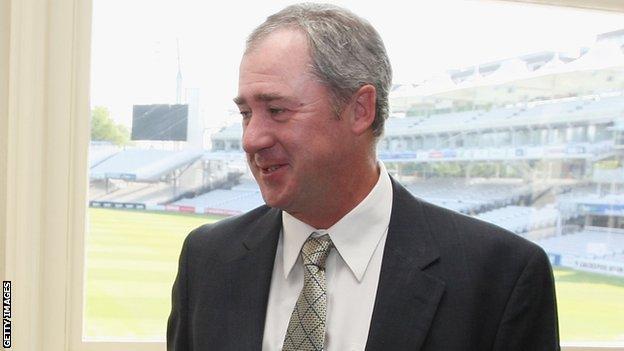 Tim May has resigned from his role as head of the international players' union after becoming frustrated at the way he sees the sport being run.

Ex-Australia spinner May, in charge of the Federation of International Cricketers' Associations (Fica), claims the current system is "failing".

The 51-year-old's departure comes less than a month after he lost his position on the cricket committee of the International Cricket Council (ICC).

"Current players have reason to be very grateful for his hard work and advocacy on our behalf."

Alastair Cook on Tim May

"The players deserve better," said May.

But he said he was tired of battling the ICC's executive board, one he claimed was unwilling to make governance changes recommended by the Woolf Report.

The ICC's independent governance review, headed by Lord Woolf, called for sweeping changes in the administration of cricket and the running of its governing body.

The Woolf Report called for a restructuring of the ICC's executive board to make it more independent and less dominated by the bigger countries.

It also recommended a re-examination of the rights and benefits of the Test-playing full member nations, calling for measures to increase transparency in dealings by the ICC and its members.

May said in a statement: "Cricket increasingly seems to be pushing aside the principles of transparency, accountability, independence and upholding the best interests of the global game, in favour of a system that appears to operate through threats, intimidation and backroom deals.

"Increasingly, the administrators of the game seek to force out or alienate those who question its alleged misuse of power, or those who seek greater transparency, or provide rational argument against the ills of the administration.

"It appears that some administrators just don't want to be held to account to the standards that are expected... the current system is failing us."

"Tim has had to deal with a lot of challenging circumstances and issues," he said. "I think he is right to be concerned, cricket deserves to have good, clear, independent, accountable governance.

''I think the ICC does in many areas a very good job and we need to continue to engage with them. The ICC executive are a very good group of people but they're being pulled in all sorts of directions by stakeholders who seem to be putting self interest above the interests of the game as a whole.

''I think the game as a whole needs to learn how to deal with India just as India needs to accept the responsibilities which go with being the economic powerhouse of the game.

"We all need to make sure the game is properly run, that we can have confidence it is being governed in the right way and that the leadership is doing things which put cricket first."

England captain Alastair Cook, speaking on behalf of the England team, said May has been a great servant of the game.

"Current players have reason to be very grateful for his hard work and advocacy on our behalf," he added.

When approached by BBC Sport, an ICC spokesman declined to comment on May's departure and claims.