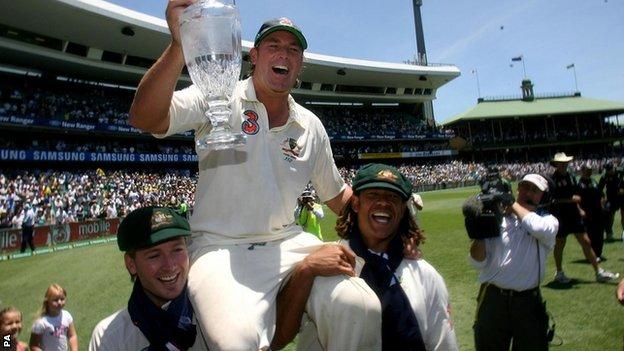 Former Australia spinner Shane Warne believes the number of opening batsmen in their Ashes squad suggests the selectors do not know their best XI.

"By picking all those openers, it seems they don't know the right mix."

The 43-year-old, who was on the winning side in seven Ashes series and took 708 wickets in his Test career, added: "I've been frustrated with the selections for the past 12 to 18 months.

Warne did back all-rounder Watson, 31, and captain Michael Clarke, 32, to perform well, although the latter is recovering from a back problem, with the first Test at Trent Bridge just over a month away.

He said: "Watson has matured a lot. He's at the age when batsmen perform their best, they know how to prepare. He's coming off the IPL [Indian Premier League] and I think he's hitting the ball better than he has in his life. We'll see if he can live up to what he can deliver in international cricket.

"For me, Michael Clarke is the most in-form Test batsman."

Warne was speaking after Australia's one-day side suffered a humiliating 243-run loss to India after being bowled out for 65 in their final warm-up match before the ICC Champions Trophy starts on Saturday.

Meanwhile, Warne is hopeful that leg-spinner Fawad Ahmed has his Australian citizenship fast-tracked in time to be brought into the Ashes squad. Nathan Lyon is the only specialist slow bowler in the 16.

"I think the whole story of his is a very courageous one," Warne said of the 31-year-old, who left Pakistan in 2010 and arrived in Australia as a refugee.

"He's come to Australia for a better life. What he has done is an interesting story.

"I wish him all the best and I really hope all the documentation goes through because I think he could be a real surprise element for Australia."