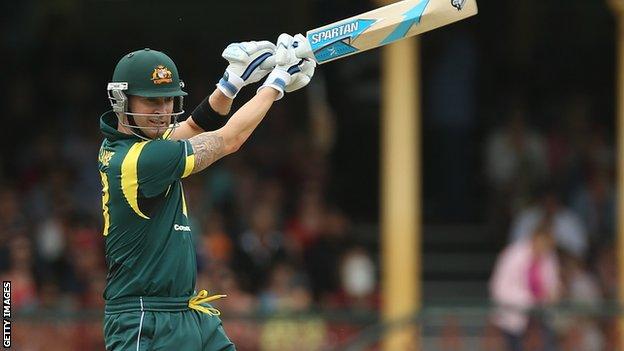 Australia captain Michael Clarke has been ruled out of his side's opening ICC Champions Trophy match against England on Saturday.

Clarke, 32, has been struggling with a lower back injury.

"He is making steady progress but is yet to return to training," said Australia physio Alex Kountouris.

"How he responds to the ongoing treatment will determine his availability for the match against New Zealand next Wednesday."

But Australia coach Mickey Arthur said on Thursday that he remains confident Clarke will be fit for the Ashes.

Arthur told BBC Sport: "I am concerned but confident we will have him firing somewhere in this tournament for us and then into the Ashes."

The Champions Trophy is a one-day international tournament featuring eight teams that runs between 6 and 23 June. The opening game of the five-match Ashes series begins at Trent Bridge on 10 July.

Arthur admits he will have to use Clarke carefully this summer, but does not think his injury problems pose a threat to his career.

"Our management of him will have to be spot on if we want longevity out of Michael," Arthur added.

"But we've got experts that will be looking after that side of it and I'm sure they will do everything in his best interests, but also in our best interests to keep him on the ground."

Clarke suffered a recurrence of his injury while on tour in India in March. He missed Tuesday's final warm-up game against India in Cardiff having also sat out last Saturday's match against West Indies.