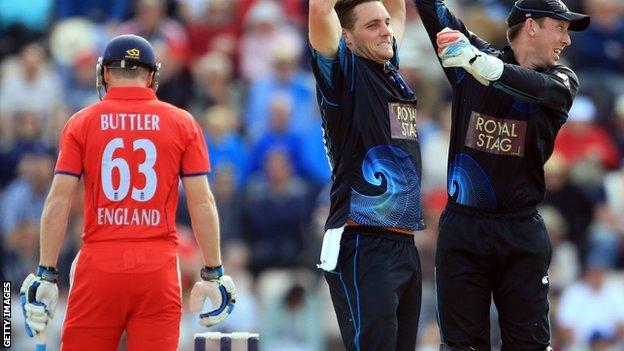 There is a great deal of doom and gloom after England lost the first two one-day internationals against New Zealand.

I can fully understand the negativity but despite the two heavy defeats I still believe England can win the Champions Trophy. But one thing's for sure - they will need to show a huge improvement to do so.

New Zealand, winners by five wickets at Lord's and 86 runs in Southampton, have so far outplayed England in all departments, and that's not something I expected to happen.

He is a very talented cricketer but has already played 37 one-day internationals for Ireland which is a problem for me.

I must stress that Rankin has not broken any rules or regulations but I find it difficult to accept that a player can represent a country having already played international cricket for another. He is not the first and won't be the last to do this but I would like to see a tightening of the rules.

It doesn't matter to me whether it's a fully-fledged Test-playing nation or a one-day side such as Ireland - once you've committed yourself to a country you should remain loyal to them.

But why have England under-performed and allowed New Zealand to get the better of them?

With no Steven Finn and Stuart Broad, England have lost two genuine wicket-taking bowlers and I believe that has been a big part of the reason.

Jimmy Anderson, now equal with Darren Gough as England's leading one-day wicket taker, has had to lead the attack on his own, while the other bowlers - Jade Dernbach, Chris Woakes and even Tim Bresnan to an extent - are not prolific wicket-takers at this level.

Finn, Broad and Anderson bowled well as a unit in the Test series so when you lose two of them it becomes a far tougher assignment.

Dernbach has overall figures of 1-142 from his 20 overs in the opening two matches and will be the first to admit that this is not good enough. He may bowl in the power-play periods, so will naturally go for more runs than other bowlers, but he must still find a way of being more consistent in his lines and lengths.

But he was not alone in under-performing. Both Woakes and Bresnan also went wicketless at Southampton, allowing the Black Caps to score freely knowing they had wickets in hand at the back end of the innings.

I must stress that it has not just been the bowling which has been poor. At Lord's, quite simply, the batting was abysmal.

You cannot expect to win games when your top scorer makes 37 [Jonathan Trott], and you post a paltry 227 in a 50-over game. Too many batsmen have thrown it away having done a lot of the hard work. Twenties and thirties simply do not win matches.

New Zealand's Martin Guptill scored 103 not out and 189 not out and he has shown the England batsmen exactly what to do - get in, stay in and get hundreds.

So where does it all leave Alastair Cook's men?

This series defeat is their first at home since they were thrashed 6-1 by Australia in 2009, although I must admit those encounters had an after-the-Lord-Mayor's-show feel to them, coming straight after England had won the Ashes.

England's form in this country had been good, with 14 wins in their previous 18 completed one-day games since 2011.

Hopefully home conditions can help them in the Champions Trophy, which begins on Thursday.

Despite my Surrey connections, it would be wrong of me not to mention Essex all-rounder Graham Napier's outstanding performance against Surrey at Chelmsford on Monday.

He took four wickets in four balls, ended with figures of 7-32 and helped his side win their YB40 match by 178 runs.

Napier showed a full array of skills, and while I do not currently see him as an England cricketer, he has started the season in excellent form.

England have never won a global 50-over world tournament but they should not be dismissed as potential champions. A big improvement is needed, but the squad certainly has enough talent.

Add in Broad and Finn to accompany Anderson and Swann and all of a sudden the side has a completely different look.

Trying to pick an obvious winner is tough, though.

New Zealand are flying high yet are ranked eighth while Australia, who are ranked number one, suffered a humiliating 243-run loss to India in a warm-up game on Tuesday.

South Africa will be strong but could really miss the experience of Graeme Smith and Jacques Kallis.

West Indies, with Chris Gayle in their team, cannot be written off.

And if the sun continues to shine and the pitches stay dry - not offering sideways movement for the new ball - India, Pakistan and Sri Lanka can all be viewed as potential winners.

The Champions Trophy is a good format. It's a short, sharp competition with only the top eight countries competing at three venues - The Oval, Edgbaston and Cardiff.

Quite simply, if you win five games you are guaranteed to lift the trophy.