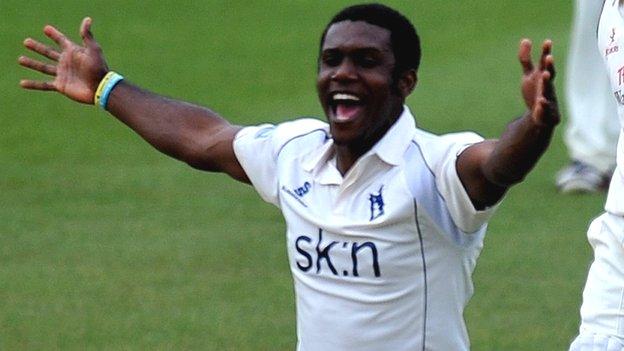 Warwickshire left-armer Keith Barker is in line for a first appearance of 2013 for the faltering county champions after recovering from a side strain.

Opener Ian Westwood, who has recovered from an ankle injury, is also included in a squad of 13 for this week's County Championship game against Surrey.

The Bears have also named Boyd Rankin, in case he is not needed by England against New Zealand at Trent Bridge.

Rankin was not used in Sunday's defeat at Southampton after being drafted in.

But the former Ireland paceman could make his England one-day international debut if Steve Finn and Stuart Broad are both unfit.

However, if he does not make the final XI, Warwickshire have permission from the England and Wales Cricket Board for him to take some part against Surrey at Guildford, even if he does not actually start the game.

"We've got that luxury of pulling him into the game for day two," Bears coach Dougie Brown told BBC WM.

"We have to see how he comes through physically and mentally."

After being called up by England, Rankin was one of four Bears in Sunday's squad, causing him to miss Saturday's one-day defeat by Worcestershire at New Road, which stretched Warwickshire's run to just two wins in 12 games this season in the County Championship and the YB40.

However, Brown refused to use that as an excuse.

"Boyd would not have relished Saturday's pitch," he added. "It was very benign and very low.

"And it's great for Warwickshire to have so many players in the England frame.

"We're in that losing habit and we're just not quite getting across the finish line,but we know we're not far away."

The Bears have lost just once in the Championship, but have not been helped by having to make so many changes for each game, because of injuries and international comings and goings.

They are still without Laurie Evans and Oliver Hannon-Dalby as they come up against a Surrey side including Australian Ricky Ponting, but Brown is relieved to be able to call on Barker, who was a key performer in last summer's title triumph with 56 wickets, and Westwood.

"They're coming on very well," he said. "Keith hopes by Wednesday that he'll be fit to play, while Ian Westwood had an injection in ankle on Friday, has been batting in the nets over the last few days and looks in reasonable shape.

"Ricky Ponting seems to be in form at the moment, but Surrey have got a number of good players and we have to concentrate on every single one. And we're also big believers on focusing on what we do."