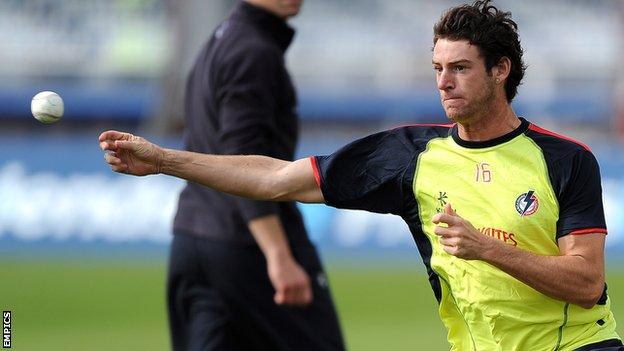 During a second XI match in April,

He blasted a brisk 72 in Lancashire's YB40 defeat by Durham on Sunday to press his claims for regular selection.

"The YB40 is my way into the first team. Hopefully performances like that will help me cement my spot," the 22-year-old told BBC Radio Lancashire.

"My bowling is another string to my bow, and the more experience I can get, hopefully it will make me as a player."

Six sixes in an over

Clark's profile soared earlier this year when he became the first Englishman to join the select band of cricketers who have scored six sixes in a single over of a professional match, achieving the feat against Yorkshire's second XI at Scarborough.

Whitehaven-born Clark has played eight times in the 40-over format since making his debut for the Red Rose in 2010 and has made a further nine appearances in T20 cricket.

He continued: "I've been speaking to people like [Lancashire team-mates] Simon Katich and Ashwell Prince, who have played the game for a long time, and getting experience from them is fabulous."

Meanwhile, seamer Kabir Ali made his long-awaited debut for Lancashire against Durham, having

The former England Test bowler claimed two wickets at the Riverside and then hit a quickfire 59 from 29 balls, albeit in a losing cause.

"I've worked hard with the medical staff and played a few second-team games, but it was just nice to be playing in a Lancashire kit," said the 32-year-old, who joined from Hampshire during the winter.

"I had quite a bit done [to the knee] and we had to be a little bit careful. I could have easily pushed myself but we weren't sure how it would react."